Cape Town, August 18, 2018: On Saturday 18 August 2018, the Namibia senior rugby team the Welwitschias played against Kenya during the 2018 Rugby Africa Gold Cup, which is also a qualifier for the 2019 Rugby World Cup in Japan (Namibia qualified). 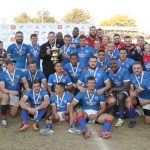 This was the fifth win for the Welwitschias and saw Namibia qualify for the 2019 Rugby World Cup in Japan. Namibia opened the scoring through a penalty by Clive Loubser.

Kenya then scored the first try of the match through right winger William Ambaka which was converted by Darwin Mukidza, to take a 7-3 lead inside 13minutes.

Namibia hit back through Chrysander Botha’s try which Loubser converted for 17-7 scoreline.

Kenya were offered an opportunity to reduce the arrears through a penalty but Ambaka missed.

Loubser then added a try and a conversion to take the scoreline to 22-7 at halftime.

The Welwitschias resumed the second half stronger with Van Der Westhuizen adding his second try of the day within a minute of resumption with Loubser adding more points from the boot.

Namibia qualified ended the game on top with a 53-28 score against Kenya today in Windhoek, Namibia

The Welwitschias who have won the Rugby Africa Gold Cup for four times in a row will be looking to qualify for the 2019 World Cup finals slated for Japan.

With Namibia dominating the game, Kenya made a raft of changes which added urgency to their game with Ambaka scoring his second try for Kenya.

Mukidza converted the try to take the scoreline to 32-14.

The home side hit back immediately through Tjeriko Mahepisa and Loubser converted to give Namibia a 39-14 lead.

Darrly De la Harpe added his name to the try scorer and Loubser converted to take the scoreline to 46-14.

Kenya then scored and converted two more tries while the home team added one more converted try by Botha to leave the final scoreline at 53-28 in favour of Namibia.

With the victory Namibia qualified retained the Africa Gold Cup for the fifth time and qualified for the world cup.

Kenya will have another chance to claim a spot at the world cup when they play the repechage qualifies in November.

“We played well today, the team stuck to the game plan.

This means a lot as we have been building a team since the last world cup. We have an average age of 24 years now compared to 31 at the previous tournament.

We have depth now,” he explained.

Captain Johan Deysel said Namibia had played well by utilizing all the chances that came their way.

Ian Snook the Kenyan coach said his team played their hearts out but lost the match due to lack ‘intelligence’.

“Namibia qualified has been impressive all along this competition and today the strongest team has won.

Congratulations and I have no doubt that they will make us proud at the RWC 2019 in Japan.

Well done as well to Kenya who kept going and played really well.

I am very proud of our African teams and the progress they have made over recent years.”

“As the main Official Partner of Rugby Africa, we will put all our efforts in ensuring the world knows about Namibia’s participation in the World Cup.

We will soon unveil a communication plan aimed at promoting African rugby during the Rugby World Cup 2019.” —- Distributed by APO Group on behalf of Rugby Africa.