Home  »  OTHER SPORTS   »   Mexico dominant at home with classy wins 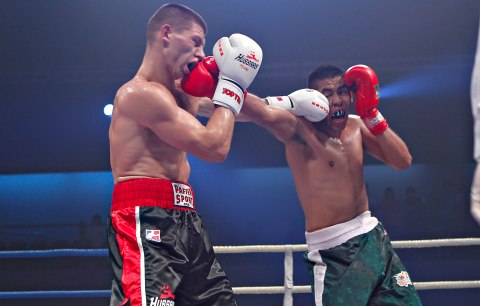 Lausanne, Nov 17: Hussars Poland unable to cope with speed and accuracy of Mexico Guerreros with fortress Foro Polanco living up to its name as Emigdio lead the hosts to victory as Alvarez Diaz, Cabrera Vergara and Munoz Gutierrez also record wins in breathtaking Group A match.

The home side flexed their muscle early on with 2012 Individual Championships finalist and veteran of two WSB seasons Elias Emigdio getting proceedings underway in the Bantamweight (54kg) contest versus Hussars Poland teenager Sylwester Kozlowski. The experience of the Guerreros orthodox fighter told as he subjected his opponent to a constant barrage of shots throughout the five rounds to storm to a resounding victory.

With the wind now firmly in their sales, Mexican Lightweight (61kg) Fernando Alvarez Diaz began at frenetic pace, applying constant pressure on Jacek Adam Wylezol of Hussars Poland in the next contest. The local boxer looked comfortable, dictating the tempo with the good use of the jab to give his team a 2-0 lead in the tie.

19-year-old southpaw Marvin Cabrera was next in the ring for the home side, he faced Mateusz Jerzy Tryc at Middleweight (73kg).The Guerreros teenager’s compact style and solid combination punches hurt his rival with the vicious body shots doing most of the damage. It was clinical and a joy to watch with the hosts now guaranteed the overall victory.

The dominance of Mexico Guerreros continued in the Light Heavyweight (85kg) riveting match-up between Isaac Munoz Gutierrez and the visitor’s Michal Gerlecki. The fans in the arena were treated to real boxing feast in this one with five high quality rounds. Notching up another win, the home team were on a real high with the score now reading 4-0.

Promising Polish Heavyweight (91+kg) Michal Olas, who made the switch over the summer from reigning WSB Team Champions Italia Thunder, showcased his power and confirmed his growing credentials in a sensational final bout. The 23-year-old Pole reduced the deficit for the Hussars with a demolition job of the experienced Venezuelan southpaw Jose David Payares. Early in the second round, Olas unleashed a punishing overhand right that floored his opponent and from there knocked him down twice more to win by TKO.

It was a sensational match that had it all and once again demonstrated the quality and calibre of the fighters in the world’s premiere boxing team competition. Mexico Guerreros now travel to Argentina to face the Condors on Friday 23 November at Club Villa Lujan as Hussars Poland host Russia that same day. —- WSB