Home  »  OTHER SPORTS   »   Mehdi and Noor Haironi Clinch the TITLE 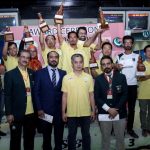 The Diplomatic Cup Tenpin Bowling Championship, Karachi 2016 took place for the First time in Karachi on Saturday, that was organized by Sindh Tenpin Bowling Association with collaboration of Consulate General of Malaysia, Karachi at Royal Rodale Club, DHA, Karachi. The Diplomats from Consulate of Malaysia, China, Japan and Italy took part in the championship. in Men’s Singles, Women’s Singles and MixTRIOS Event.

The EVENT ended with a happy note of thanks by host CG of Malaysia who stated he was very pleased with the participating Consulates who joined the event on short notice and the results of the event.

HE. Ismail Mohammad Bakri thanked the efforts of STBA and said this event was not possible without their efforts. He ended the speech by thanking management of Royal Rodale for venue and promised another bigger electric 2107.

During the address Mr. Shakeel ur Rehman Said “Royal Rodale as a pioneer of Bowling in Pakistan, shall continue support to bowling in collaboration with STBA for organizing such Diplomatic Event and offering valued packages for the training of bowlers, special packages to STBA members and future exciting events. He distributed Cash Awards & Trophies to winning participant.”

While talking to Media, Romis Ali, Founder General Secretary of STBA said, “We call this Diplomatic Cup a treat to our Honourable Diplomats in Karachi. However, the code of conduct and legitimacy of STBA has made the Bowling a progressive sport in the region and provided the consistency to retain its position in the winning circle. We are making all possible efforts to hear the dropping of Bowling Pins in every District of Sindh by getting sports areas approved by Government for bowling alleys and installing professional lanes.

Aleem Agha conducted a Award Ceremony to give the evening a fabulous end, and registered members were given high importance and encouragement for their participation to create a lively and enjoyable environment after a tough competition. The Gift Hampers was given on behalf of Royal Rodale & Consulate General of Malaysia, for the Participants. The evening ended with delicious High Tea followed by a word of thanks by Aleem Agha, for enthusiastic and highly supportive participation and presence of the Diplomats. —- STBA