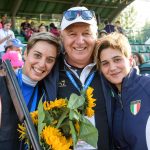 In the , Italy’s Maria Lucia Palmitessa chose the perfect moment to climb on the higest step of the ISSF podium for the first time in he career. After qualifying for the final with the highest score, in fact, the Italian 18-year-old grabbed the lead at the early stage of the match, then building a comfortable lead that allowed her to survive some risky misses in the final ten target.

Indeed, despite hitting all of her last 14 clays, Russian Federation’s 19-year-old Iuliia Saveleva was not able to close the gap with her rival, finishing only 1-hit behind her and claiming the Silver medal with 39 hits against Palmitessa’s 40.

The podium was completed by Palmitessa’s teammate, 18-year-old Diana Ghilarducci of Italy, who entered the final with the sixth qualification score and took Bronze with 26 hits, securing her first career international medal.

Ghilarducci was followed by Slovakia’s 20-year-old debutant Veronika Vergova, who barely missed the medal positions and placed in 4th position with 18 hits, and by Serbia’s Nikolina Blagojevic, who entered the top-6 for the first time in her young career, taking 5th place with 14 crushed clays.

The second Russian participant, Polina Kniazeva (16), finished in 6th position with 10 target hits, matching the result she obtained at the 2017 European Championship in Baku (AZE).

In the following Trap Women event, the 2012 Olympic Champion Jessica Rossi of Italy finished atop the podium.

The 25-year old Italian athlete scored 43 hits out of 50 targets in the final, to beat Rio 2016 Olympic Champion Catherine Skinner of Australia, second with 41 hits, and the 2008 and 2012 Olympic Silver medalist Zuzana Rehak Stefecekova of Slovakia, 3rd with 32 hits. The defending champion, Spain’s Fatima Galvez, closed the match in 4th place with 27 hits.

Rossi — who earned her third senior world title, adding it to a junior one and to eight World Cup podiums — had won her last ISSF World Championship medal back in 2013.

Rossi shot neck and neck with Skinner since the beginning of the final. Skinner gained two targets of advantage half way through the match, but Rossi came back in the lead after the 41st shot, managing a two-target margin right to the end.

Rossi’s victory also pushed the Italian team — composed by her, Alessia Iezzi and Silvana Stanco — upon the third step of the teams’ podium, with a combined score of 203 hits.

Ashley Carroll, 6th in the individual event, Caitilin Barney Weinheimer and Corey Cogdell won USA the teams’ world title with 203 hits, while Silver went to Finland thanks to Marika Salmi, 5th in the individual event, Satu Makela-Nummela and Mopsi Veromaa, with 203 hits as well. Since all the top-3 teams closed the match with an equal score, the final ranking was decided by the count-back tie-braking rule. —- ISSF