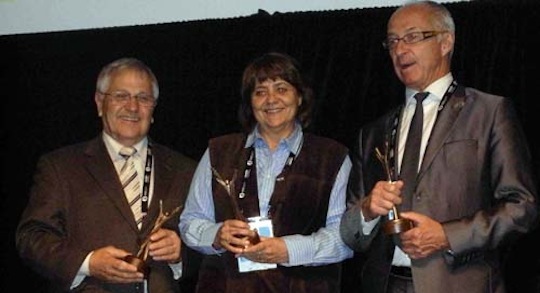 Lausanne-Switzerland, May 27, 2012: Major Award, The ITTF Women’s Development Programme gained second place in the Spirit of Sport Awards at the SportAccord Convention in the Quebec city, Canada on Thursday 24th May 2012.

Three Spirit of Sport Project Awards from a total of 19 nominations were made; in addition to an individual award.

First place for Project Awards went to a programme organised by the World Chess Federation to help with the intellectual development of young people in the Brazilian State of Espirito Santo.

The Peace Games organised by the Conseil International du Sport Militaire, gained third place; whilst Spain’s Sylvana MESTRE, who had been nominated by the International Paralympic Committee following 14 years of service in the area of sport and disability, received the individual award.

John AMAECHI, the North American Basketball star, made the announcements with Neil HARWOOD, ITTF Deputy President, receiving the award from Hein VERBRUGGEN, the President of SportAccord.

In addition to the awards, International Sport Federations were able to present their sports to the visitors at the Sports Demo Zone. Table tennis was one of the Olympic sports featured with a 45 minutes demonstration being presented by three Canadian junior players under the guidance of their coaches.

Video and photo images of the Peace and Sport Cup staged last November in Doha were featured, as well the Burundi project promoted by the ITTF Development Department. The visit of the party from Burundi to the LIEBHERR World Team Championships earlier this year in Dortmund was featured. PHOTO: Courtesy of Judit Farago