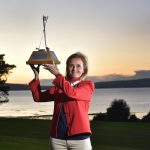 The championship, which suffered a suspension of play due to heavy rain and flooding on Wednesday, got underway at 8am on Thursday with the cut reduced from the top 40 players and ties to the leading 25 players and ties progressing to the final round instead.

Finishing on five-over-par 218, she won by five shots from Australia’s Sue Wooster with the defending champion, Laura Webb, in third place on 11-over-par after a closing round of 74.

Tied with Wooster at the start of the final round, Campomanes Eguiguren, who captained the Continent of Europe in the Vagliano Trophy on three occassions, made a fast start and never lost control.

A twisting 25-foot putt went down for a birdie at the long opening 1st and she holed from six feet for another gain at the 3rd.

The Spanish lawyer did drop a few shots in the damp underfoot conditions, but no one threatened to stop her from claiming the title for the first time. By the time Campomanes Eguiguren made her next birdie at the short 14th she had a comfortable five shot lead.

Her final two-over-par round was the joint best of the day – Gertie McMullen (The Island) also shot 73 in the final round and rose to finish tied for seventh place on the leaderboard.

Wooster started positively, chipping in for a birdie at the opening hole. But a double-bogey from the bunker at the 2nd followed by more trouble in sand at the 3rd and 4th saw her slip behind.

Winner of the Canadian Women’s Senior Championship in August and on her way home from a golfing tour of America, she finished with a 78.

Webb, the winner at Caldy last year, put up a spirited defence. A member at East Berkshire, but originally from Northern Ireland, she returned a best of second round 74 to move into third place going into the final 18 holes.

Capomanes Eguiguren, who twice helped Spain win the World Championship, she now has another title to add to her list of achievements.

Now in the Senior ranks – finishing third at Royal Dornoch three years ago – she now has another title to add to her list of achievements.

The 2018 Ladies Senior British Open Amateur Championship will be held at Crail in Scotland from 18 – 20 September.

Key Quotes
Macarena Campomanes Eguiguren (Spain)
“I am very, very pleased. When Sue chipped in at the first I thought I had an impossible putt, but I managed to hole it.
“After that I didn’t really get nervous until I was coming down the final few holes. It is great to win the title.” —- Photo by Charles McQuillan/R&A