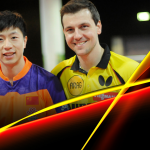 China’s MA, the reigning Olympic champion, and BOLL of Germany will renew their partnership at this year’s World Championships, to be held in Dusseldorf from May 29 to June 5, two years after they last played as a pair in 2015.

On that occasion in Suzhou, they were beaten in the second round by eventual champions XU Xin and ZHANG Jike, although the duo has tasted success before when they beat a similar Chinese-German pair of Dimitrij Ovtcharov and Yan An on the ITTF World Tour in Chengdu back in 2013.

“I’m very excited to be playing with Timo for the Men’s Doubles event”said MA. “It’s a pity that we lost in the second round in 2015. Actually, we played well and we had chances back then. I hope that Timo will be playing his best form on home soil and I will value this opportunity again to play well in the event.”

Echoing his partner’s sentiments, 26 year old BOLL explained: “I am looking forward to our second attempt at a World Championships. On one hand, I have a good contact with MA Long also away from the table. On the other hand, our performances at the China Open 2013, as well as in 2015 in Suzhou, brought great and memorable moments for both of us, even if our success had different results. Now, we have a third attempt in my home country. This is another wonderful and very fine career highlight for me to play with MA Long at home soil in Dusseldorf.”

The MA-BOLL partnership is just one of several tantalising doubles pairings that were announced on Wednesday.

Also competing in the Men’s Doubles are Chinese National Team colleagues Fan Zhendong and Xu Xin, who like Ma and Boll are previous champions of the China Open when they emerged triumphant in Chengdu two years ago.

Over in the Mixed Doubles category, China’s FANG Bo is set to link up with German Petrissa SOLJA, while FANG’s fellow compatriot FENG Yalan will find herself on the same side of the table as Jonathan GROTH of Denmark.

Both FANG and SOLJA spoke of their excitement at the prospect of pairing up in their quest for a gold medal come the end of May in Dusseldorf.
“I am very happy to play mixed doubles with SOLJA,” said FANG. “I have watched her play before and know that she is a very good player. I will try my best and do the full preparation during the closed training. I hope I can pair with SOLJA to win the Mixed Doubles title in Germany.”

SOLJA added: “It will be very special for me to play alongside one of the strongest players from the world’s best nation. How successful this can work was shown by Xu Xin and his Korean partner Yang Haeun, who became world champions 2015 in Suzhou. We are also a left and right hander combination, so we will take XU Xin and YANG Haeun as a good example and see how far that goes.”

On the topic of mixed-nationality pairings, ITTF President Thomas WEIKERT said: “Double pairs from different nations are enriching our sport and will make relationships between National Associations even stronger.” —- ITTF