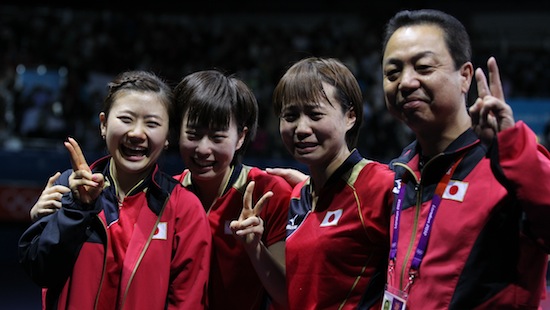 177 players from 23 countries will fight it out for the lucrative prize cheques and valuable World Tour points to ensure their qualification into the $1 million World Tour Final.

The sold out sign has already been put up, as this is the first time Ai FUKUHARA, Kasumi ISHIKAWA and Sayaka HIRANO will be in action at an international event on home soil as London 2012 Olympic Games teams silver medallists.

ISHIKAWA and FUKUHARA are seeded one and two, so a dream all Japanese final could be on the cards. If all goes to seeding, ISHIKAWA will meet LI Jiao (NED) in her semi-final and FUKUHARA will face off with JIANG Huajun (HKG) for a spot in the final.

The 20 year old World number 8 ISHIKAWA stated during her training: “I am feeling good. This is the first international tournament held in Japan since the London Olympics, so I really want to perform. I hope everyone will come and cheer me on, which will help me produce a good performance.”

The capacity crowds will also have high hopes for the star studded Japanese men’s team, led by World number 10 Jun MIZUTANI and Youth Olympic Games Champion Koki NIWA. Unfortunately they have been both drawn in the same half, so they will be unable to meet in the final.

The young local duo of Kenta and Kenji MATUDAIRA are being touted as the next big thing in Japanese table tennis. However, they will face the sternest of tests in Yokohama, with Kenta being drawn to play the number one seed and World Doubles Champion CHUANG Chih-Yuan (TPE) in the second round, and brother Kenji faces the number two seed and former Olympic gold medallist WANG Liqin (CHN) if he wins his first round match.

22 year old Kenta stated after the draw: “Me and CHUANG have been very close when playing. It will be a tough match but I think I can win, especially with the home crowd on my side.”

“I took a break after my breakthrough event in Paris, so I am not feeling 100% fit, but hopefully I will be good enough”, concluded the World number 28 who beat top 10 players MA Lin and Vladimir SAMSONOV on his way to the quarter finals at last month’s World Championships.

Qualification begins tomorrow for the Senior Singles, U21 Singles and Doubles, while the main draw begins on Friday. —- Photo by ITTF/ An Sung Ho.