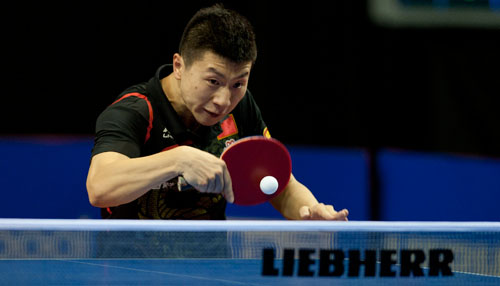 The top seed and favourite for the title, China’s MA Long, won the LIEBHERR Men’s World Cup title in the city of Liverpool on Sunday 30th September 2012. Not only did he win the title, he won in the most emphatic manner possible. After suffering a shock defeat on the opening day of play against Chinese Taipei’s CHUANG Chih-Yuan, he never surrendered a single game.

On the penultimate day of action, he concluded his group matches by beating England’s Paul DRINKHALL, before overcoming Denmark’s Michael MAZE in the quarter-finals; on the concluding day of action he was even more destructive. He beat team mate XU Xin in the semi-finals and Germany’s Timo BOLL in the final.

It is the fourth major title that MA Long has won in England. In 2009 he clinched the Men’s Singles title at the English Open, two years later he was crowned Men’s Singles champion at the ITTF Pro Tour Grand Finals and at London 2012 Olympic Games he won gold in the Men’s Team event.

Third place went to Vladimir SAMSONOV of Belarus, who turned the tables.

In the first phase of proceedings he had been beaten in five games by China’s XU Xin and had progressed to the semi-finals courtesy of a nail-biting quarter-final win over CHUANG Chih-Yuan.

However, at the semi-final stage he was beaten by Timo BOLL, after having clinched the first two games before losing four in a row.

A bronze medal match against XU Xin was thus the order of the day and Vladimir SAMSONOV, playing in no less than his 14th Men’s World Cup, responded to beat the 22 year old Chinese star.

Vladimir SAMSONOV made his debut in the Men’s World Cup in the French city of Nmes in 1996; on that occasion he finished in third place; 16 years later it was the same scenario, the bronze medal.