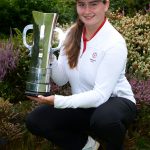 Following today’s triumph, the 15-year-old has earned an exemption into Final Qualifying for the Ricoh Women’s British Open next year and will aim to secure a place in the starting field at Royal Lytham & St Annes.

Humphreys surged into the lead on the par five 1st after a birdie four secured the hole and the 2017 European Young Masters champion was soon 2up on her opponent after Overas could only manage a double-bogey on the short par three 2nd.

The England youth international extended her advantage to three holes after an excellent birdie on the 3rd, before taking a firm grip of the match at 4up after the Norwegian made a bogey on the 4th to lose another hole.

The blistering start made by Humphreys to win four consecutive holes eventually ran out of steam after the pair halved both the 5th and 6th before Overas made small inroads into reducing the deficit by bouncing back to win the 7th with a birdie three.

The fightback was short-lived however; Humphreys responded in kind by birdieing the 8th to restore the lead back to four holes and laid one hand on the trophy after rolling in a birdie on the par five 10th to move to 5up.

Overas conceded on the 11th to widen the gap to six holes before the duo both made birdie on the 12th to halve the hole.

Humphreys closed out the match on the 13th after Overas conceded the hole, sealing a memorable win to lift the Girls Amateur title.

In the first of this morning’s semi-finals, Humphreys narrowly overcame Germany’s Paula Kirner by one hole to secure her passage to the final.

Overas sealed her place in the final by a fine margin too, defeating Elena Moosmann of Switzerland by two holes.

“It feels so good. I played so well this afternoon and didn’t miss a putt. I was six-under-par through thirteen holes so I guess that’s pretty difficult to beat. I didn’t feel the pressure, I just went out to play my best.

“This win means so much. I have so much confidence after this win and can’t wait to get my hands on the trophy. We had lots of fantastic support too, it couldn’t have been much better. This is the best I’ve ever played to win a tournament.”

Emilie Overas
“Lily played so well, she really deserves to win the championship. She was amazing today.

“This week has been such a good experience and I have learned a lot about my game. There have been lots of good moments this week.” —- Image: The R&A