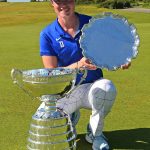 Maguire will now take her place in US Women’s Open next month and the Ricoh Women’s British Open at Kingsbarns, near St Andrews, in August, when she will aim to win the Smyth Salver as the low amateur for a second time after doing so at Woburn last year.

Maguire, who is number one in the women’s WORLD AMATEUR GOLF RANKING™, becomes the first Irishwoman to win the championship since Stephanie Meadow defeated Spain’s Rocio Sanchez Lobato 4&3 at Carnoustie in 2012.

The 22-year-old from County Cavan made a flying start after dispatching a birdie opportunity on the 1st but the match returned to all-square on the following hole, Olarra saving par while Maguire struggled with a bogey.

Maguire found herself behind, remarkably for the first time in the championship’s entire match play stage, after Olarra, who won the Spanish Amateur Championship in 2013, picked up a birdie on the 3rd hole to move 1up.

The South Carolina University scholar saw her lead pulled back immediately when Maguire fought back with a birdie to win the 4th hole and was powerless to stop the Great Britain and Ireland international regaining control of the contest on the 5th hole after she rolled in a birdie on the par-5 to take a one hole advantage.

Maguire, who recently won the Annika Award for the second time in her career, strengthened her position even further after winning the 7thand 9th holes to move 3up but Olarra reduced the deficit at the 10th.

Nevertheless, the three-hole gap was restored on the 11th when the two-time McCormack Medal winner notched up her fifth birdie of the round and the Duke University student remained steady with a par on the 12th to go 4up after her Spanish opponent could only manage a bogey.

Olarra’s refused to throw in the towel and the youngster from San Sabastian halted Maguire’s momentum by winning two of the next three holes, producing a vital birdie on the 15th.

The match was decided on the following hole, however. Olarra had struggled with her putting throughout the match and a bogey on the 16thleft Maguire with a par putt to win the championship which she duly rolled in for a 3&2 victory.

In the first of this morning’s semi-finals, Maguire defeated Finland’s Anna Backman 3&2 to secure her passage to the final.

Olarra closed out her match with Norway’s Stina Resen on the par-3 15th, rolling in a birdie putt to seal a 4&3 win.

Key Quotes:
Leona Maguire
“It’s been a fantastic week and I’ve played some really great golf. It’s a real highlight of my career to have won the championship. It’s one of the biggest amateur events and one that I felt I hadn’t given as good a go as I could have done in the past few years.

It’s great to get my name on the trophy alongside some of the biggest names.

“Ainhoa played really great golf and she pushed me all the way to the end. I knew I was going to have to play well. She threw all the birdies she could at me and I was glad I was able to rise to it.”

Ainhoa Olurra
“I’m a bit frustrated as I don’t think I played my best. I didn’t play as well as I did this morning and I was struggling with my putting this afternoon. I made a few bogeys and it cost me.

“Leona is a great player and I have played against her in the United States. She has won many events over there and I am sure she will win many more.” —- The R&A