Home  »  OTHER SPORTS   »   Aerobic Gymnastics in the Republic of Iran 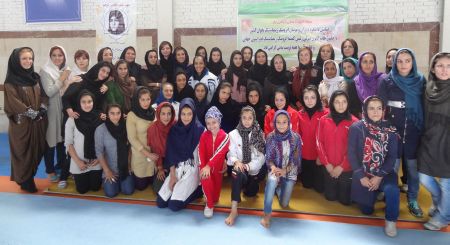 Lausanne, Feb 27, 2013: In the context of its quadrennial development programme, the President of the Aerobic Gymnastics Technical Committee for the International Gymnastics Federation (FIG), Ms Mireille Ganzin (FRA), travelled to the Islamic Republic of Iran to address the issue of Aerobic development within its borders.

The trip was arranged upon invitation by the National Gymnastics Federation and its President, Mr Jafar Darvish Zadeh, and provided an opportunity for the FIG representative to get acquainted with gymnastic tradition in Iran.

Aerobic gained a foothold in the country starting in 2003, primarily due to the efforts of French champion Grégory Alcan, currently retired from competitive sport and who was a national coach until 2012. His activity led to an Iranian group’s placing among the finalists at the 2012 World Championships in Sofia (BUL), which in turn opened the doors to the 3rd Asian Championships in Palembang (INA) in October 2012, where the trio claimed a Silver medal, and the 2013 World Games in Cali (COL).

Due to its success at that time, Iran has been participating regularly in international calendar competitions, but in Men’s events only. However, efforts are being made today to train female gymnasts and their entourage in the hopes that they will soon be able to participate alongside the international elite.

Female participation in international competitions was discussed at length by Ms Ganzin and her Iranian colleagues, among whom Bahram Afsharzadeh, Secretary General of the National Olympic Committee of the Islamic Republic of Iran, executives from the National Gymnastics Federation, its Vice-President, Ms Jamileh, Secretary General Farohmarz Sanguini, and President of the Aerobic Committee and Director of International Relations, Ms Leila Zakizade.

This new collaboration between Iran and the FIG continues with education for female coaches through the FIG Academies, and an international competition open to women. As such, a decision with regard to dress will be issued by Republic authorities, to the anticipation of all, and could allow the female group to participate for the first time in an Aerobic Step event. —- FIG/ Image © IRI