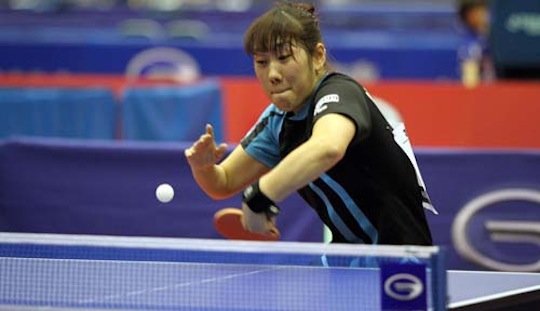 Lausanne, Switzerland, June 07, 2012: Koreans, Korea’s PARK Young Sook and YOO Eun Chong were the players to cause the major upsets, as matters commenced in the first stage of proceedings in the Women’s Singles event at the GAC GROUP 2012 ITTF World Tour Japan Open in Kobe on Wednesday 6th June 2012.

Daniela DODEAN was the third highest rated player on duty in the opening stage of the Women’s Singles event.

Furthermore, both Koreans have booked their places in the main draw. They have completed their group stage matches. Earlier they had caused further upsets, PARK Young Sook accounted for Japan’s Saki TASHIRO (wr no.100) and YOO Eun Chong had opened her account with victory over Hong Kong’s LEE Ho Ching (wr no.94).

However for the other leading names on duty in the first phase of the Women’s Singles event there were no such problems. The Korean duo of MOON Hyun Jung and DANG Yeseo, the two leading names on duty, enjoyed success as did Austria’s LIU Jia, the 2005 European champion.

Meanwhile, in the first stage of the Men’s Singles event, the leading names progressed unblemished but for the most prominent name of all there was a scare.

Sweden’s 46 year old Jörgen PERSSON, the 1991 World champion, he had to bring all his experience to bear; he needed the full seven games to beat Hong Kong’s WONG Chun Ting

Otherwise there were no great problems for the celebrated names in action in the first stage of the Men’s Singles event.

Koreans Hit Form to Cause Opening Day Upsets in Kobe