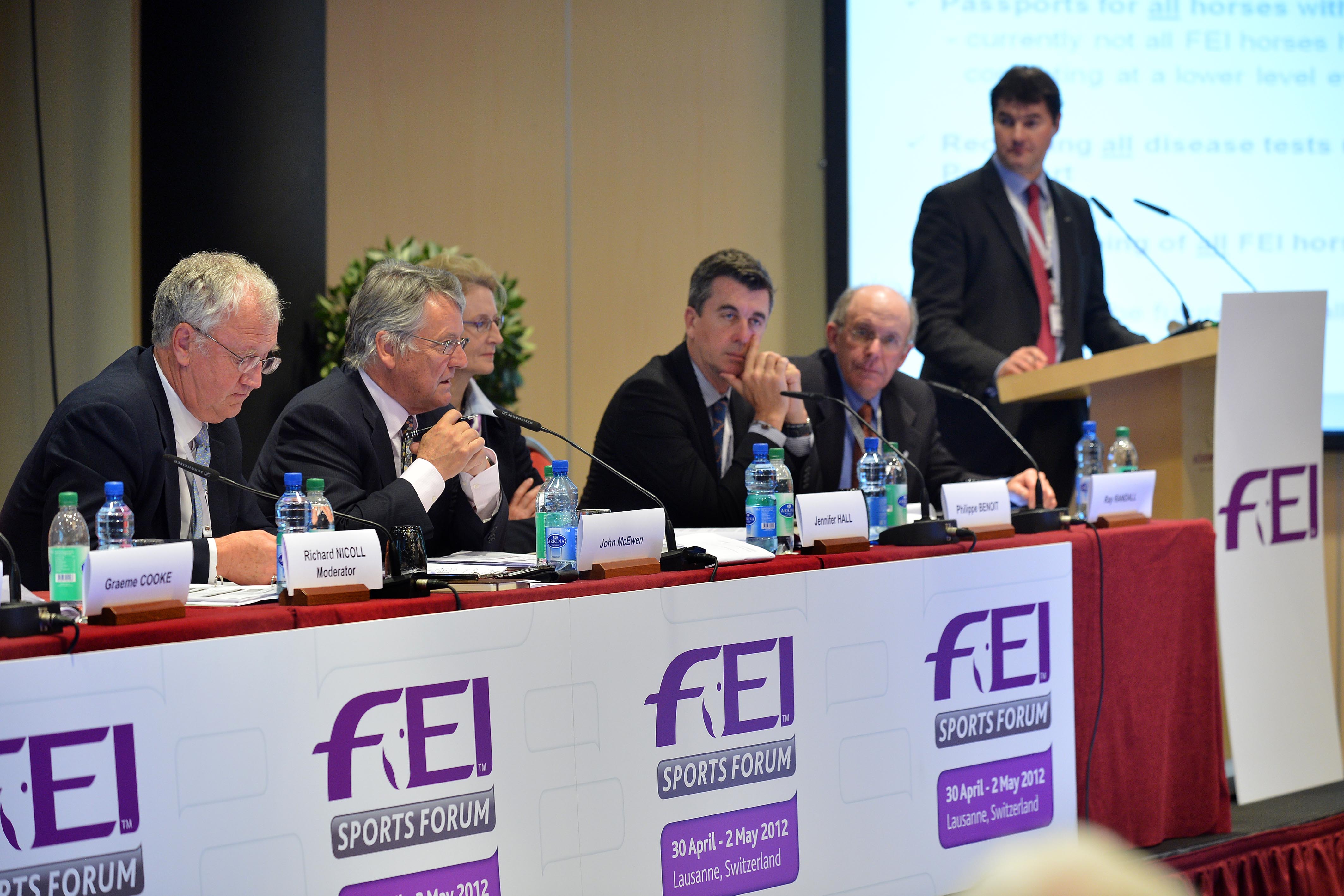 Lausanne (SUI), May 02, 2012: Key Veterinary issues were the focal point for the afternoon session at the inaugural FEI Sports Forum in Lausanne (SUI) today, which was attended by over 180 delegates from National Federations, the veterinary community, the International Jumping Riders Club and members of the media.

The Forum covered four central themes, delivered by a nine-strong panel headed by John McEwen, Chair of the FEI Veterinary Committee. The key issues covered were:

• Changes to the 2013 FEI Veterinary Regulations

• Cloning and Progeny of clones

“This is a significant year, when we have the opportunity to undertake a major review of the FEI Veterinary Regulations,” FEI Veterinary Director Graeme Cooke said.

“Today, we are looking forward to listening to those who use the Regulations in order to make relevant changes. We will be taking the results of the findings from today’s discussions into tomorrow’s Veterinary Committee meeting and onwards for further dialogue before our General Assembly.”

As well as re-formatting the 2013 Veterinary Regulations to make them more user-friendly, and reviewing medication forms to reduce the administrative burden, the FEI is seeking improved clarity on roles and responsibilities of all persons covered by the Regulations, and biosecurity of FEI horses and FEI events.

The FEI’s plan to establish a confidential acute injuries database based on the IOC model to provide valuable feedback on injuries was welcomed.

“No special regulation is required within the Veterinary Regulations as this is well covered in the General Regulations”, he said.

Requests from the floor to harmonise the regulations further across the disciplines, and to clearly explain the fitness to compete concept, were heard and will be discussed further in the Veterinary Committee meeting after the Sports Forum.

“Welfare is paramount”, John McEwen said. “No horse will be allowed to compete if there is a welfare risk. The principles are the same, but the implementation has to take into account the differences within the disciplines.”

Graeme Cooke looked at the issue of international movement of elite horses.

“The landmark FEI and OIE Joint Regional Conference on International Movement of Horses in South America held last October in Guadalajara brought together key stakeholders to address the transportation and quarantine issues at regional and global level as equestrian sport and competition sees massive growth around the world,” he said.

“We are now working closely with the OIE on creating a recognised standard for elite, high performance and high health status horses to help increase international movement of horses for competition.”

The FEI Veterinary Committee highlighted that this would require clear guidelines for infectious disease control, including the need to move quickly on updating influenza vaccines in line with the current risks, protocols in case of disease outbreak and an approach to reducing the risk of disease to horses at all times.

Graeme Cooke stressed the need for the FEI and OIE to agree a standard for global transportation and quarantine, which would ultimately be respected by government officials worldwide.

Victoria Unt, FEI Veterinary Advisor, presented the FEI’s current position on cloning, progeny of clones and associated horse welfare issues. The FEI Veterinary Committee, together with the FEI Bureau, will review the comments made during the session on cloning and progeny and continue to monitor cloning developments.

John McEwen and Graeme Cooke also gave an update on the work of the FEI thermography team, confirming that it had been very active over the last year and will continue with its current approach. The IJRC also highlighted its full support of thermography testing.

Summing up two days of intensive debate and discussion, FEI Secretary General Ingmar De Vos said: “These have been very important days for the FEI with the creation of the Sports Forum. We have had very constructive, high level discussions and we are looking forward to receiving your feedback.”