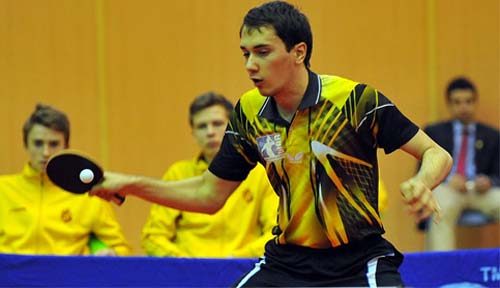 LAUSANNE (SUI), March 18, 2012: Iran’s Seyed Pourya OMRANI and Sweden’s Kristina ZETTERSTRÖM won the respective Junior Boys’ and Junior Girls’ Singles titles at the Iraq Junior and Cadet Open Championships, which concluded in the Kurdistan city of ulaimaniyah on Saturday 17th March 2012. It is for both players a new chapter in their careers, it is their first ever victory on the every growing and increasingly popular ITTF Junior Circuit.

In Sulaimaniyah both teenagers started proceedings as the favourites being the top seeds, both thoroughly justified that billing; at the final hurdle both recorded straight games victories against compatriots. Seyed Pourya OMRANI, 16 years old, beat Mohammadali ROUINTANESFAHANI (11-9, 13-11, 11-8, 11-9); whilst Kristina ZETTERSTRÖM accounted for Maria ENGELSON in a similarly impressive manner (11-4, 11-6, 11-6, 11-7). The Junior Girls’ Singles success gave 17 year old Kristina ZETTERSTRÖM a hat-trick of titles in a tournament that was dominated by Sweden.