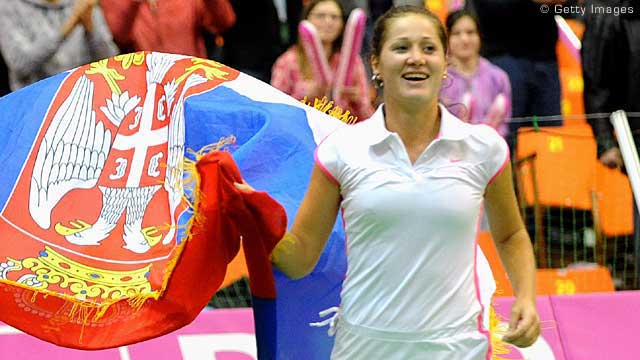 London – GBR, Nov 02: The ITF today announced that Serbia’s Jelena Jankovic has become the first player to win two Fed Cup by BNP Paribas Heart Awards in recognition of her performance during Serbia’s semifinal victory against Russia in Moscow in April.

Jankovic, who is unbeaten in Fed Cup for two years in singles and doubles, was instrumental in sealing Serbia’s place in its first Fed Cup by BNP Paribas Final. The former world No. 1, who holds the record for the most Fed Cup singles victories for Serbia, won both her singles matches against Russia, including the decisive third point against Svetlana Kuznetsova.

Jankovic, who previously won a Heart Award in 2010, was presented with a cheque for US$10,000, which will be donated to her chosen charity, the Child Oncology Department at the Clinical Center of Serbia. The presentation was made by ITF President Francesco Ricci Bitti after the draw ceremony for the 2012 Fed Cup by BNP Paribas Final at the Old Town Hall in Prague.

Jankovic said: “I’m so honoured to be given this award for the second time. I love playing for my country and giving my best. Now that we are in the final it’s a very special moment for us and winning the Heart Award makes it even more special. I would like to dedicate this award to the Serbian people who have been my inspiration throughout this year’s Fed Cup.”

Jankovic was shortlisted for the award alongside Ana Ivanovic (SRB), Petra Kvitova (CZE) and Lucie Safarova (CZE). All four players competed in the World Group semifinals in April and helped their nation reach the Final, which takes place at the O2 Arena in Prague on 3-4 November.

The players were shortlisted by the Heart Award judging panel, consisting of ITF President Francesco Ricci Bitti and a mixture of former players and members of the international media. A public vote, which ran on 8-26 October, was held on FedCup.com and FedCup.com/es to decide the winner.

A total of five Heart Awards have been presented in 2012. Jankovic follows in the footsteps of Daniela Hantuchova (SVK), Sofia Arvidsson (SWE), Catalina Castano (COL) and Li Na (CHN), who were honoured earlier this year.

ITF President Francesco Ricci Bitti said: “I would like to take this opportunity to congratulate Jelena for her outstanding performance in 2012. She has played a key role in her team’s success this season and now has the opportunity to help Serbia win its first Fed Cup title. All four nominees have shown great passion and commitment for Fed Cup, and we are expecting a closely-fought final.”

The Fed Cup by BNP Paribas Heart Award is a joint initiative between BNP Paribas and the ITF. It aims to recognise players who have represented their country with distinction, shown exceptional courage on court and demonstrated outstanding commitment to their team. —- ITF