Home  »  OTHER SPORTS   »   The Youngest Ever, Japanese Prodigy Rewrites History, Not Once but Twice 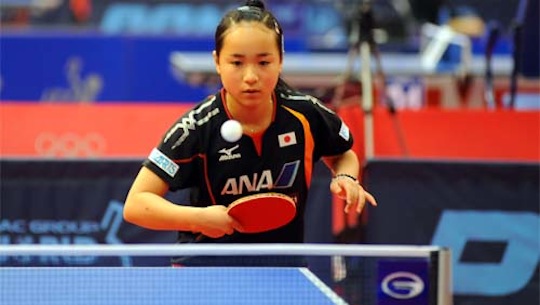 By Ian Marshall, Switzerland, April 20, 2012: Japanese Prodigy, Winner of the Junior Girls’ Singles title at the Chinese Taipei Junior and Cadet Open on Sunday 18th September 2011, Mima ITO wrote history; she became the youngest ever winner on the ITTF Junior Circuit. She secured the title just one month prior to her eleventh birthday; an incredible achievement in the Under 18 years of age group category.

Seven months and one day later, she wrote her name in the history books of sport yet again; on Thursday 19th April 2012, at the age of 11 years, she created history not once but twice. Unbeaten on the first day of play at the GAC GROUP 2012 ITTF World Tour Spanish Open in Almeria, a remarkable feat in itself, on the second day Mima ITO overcame Britt EERLAND of the Netherlands, the winner of the Junior Girls’ Singles title at the European Youth Championships in Istanbul in 2010, to book her place in the main draw of the Under 21 Women’s Singles event.

The win meant that the 11 year old had become the youngest player in the history of the Tour, which started in 1996, to reach the main draw of an Under 21 event. However, that success was soon overshadowed. In her concluding contest in the group qualification stage of the Women’s Singles event, she overcame Sweden’s 29 year old Matilda EKHOLM, one of Europe’s leading female players, to reserve her place in the main draw.

A quite staggering success and once again history was written; the victory meant that Mima ITO became the youngest player in the history of the Tour to qualify for the main draw of either a Men’s or Women’s Singles event.

Born in 2000, Mima ITO undoubtedly has a bright future ahead, as has another Japanese girl born in the same year, Miu HIRANO and just as Mima ITO was excelling in Spain, so Miu HIRANO was excelling in France. At the ITTF Junior Circuit tournament being staged in Metz, Miu HIRANO reached the semi-finals if the Junior Girls’ Singles event, losing to compatriot and eventual winner Rika SUZUKI in the semi-finals, after earlier in the day having partnered Mayuka TAIRA to gold in the Junior Girls’ Doubles competition.

Success in France for Japan with Rika Suzuki beating Germany’s Yuto IMAMURA in the final and there was almost a further success; Yuto HIGASHI reached the final of the Junior Boys’ Singles event where he was beaten by the host nation’s Trstan FLORE, the reigning European Youth Champion. Photo by Pablo Rubio.