Wuxi, Apr 15, 2017: Japanese sensation Miu HIRANO has made history in Wuxi, China to become the first non-Chinese winner of the ITTF-Asian Championships since 1996. 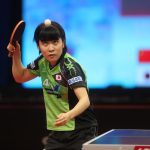 The 2016 Women’s World Cup Champion, who only celebrated her 17th birthday yesterday with a historic victory over reigning World and Olympic Champion DING Ning, continued to storm her way to Gold, upsetting World Champions ZHU Yuling and CHEN Meng both 3-0 in the semifinals and final respectively.

With the Liebherr 2017 World Table Tennis Championships less than 2 months away, HIRANO has proved her determination and capabilities to overcome Chinese dominance in international table tennis, sweeping three top Chinese stars along the way to win the historic Gold.

After winning 3-0 (11-9, 11-8, 11-7) in the final showdown against CHEN, the 2016 ITTF Breakthrough Star stated “I’m very happy and surprised with the victory. I have never thought that I could defeat the Chinese players, let alone upsetting three in a row. Previously against DING Ning, I have never won, not even a game off her. This time in Wuxi, my strategies are thorough, and I came with a good mindset to challenge my opponents and just fight my way through.”

“The Chinese have great skills and techniques, this competition made me feel that the difference between our level have narrowed, and I will work harder to make the difference even smaller between us. Since I could win the title here at the Asian Championships, I hope to continue my good form and performance into the World Championships for the title in Dusseldorf.”

HIRANO’s win rang the alarm bells for the Chinese who has dominated Chinese Women’s Team Head Coach KONG Linghui shared “It’s a normal score in the final, HIRANO was dominating the entire match over CHEN Meng, and her techniques are indeed more advanced than ours.”

“CHEN Meng had difficulties receiving her serves and did not have any advantage in her first three strokes. We will definitely have to study HIRANO’s strengths during our closed training for the Championships. Three consecutive victories against our top players has proven her capabilities.”

The Seamaster 2017 ITTF-Asian Championships continues tomorrow with the Men’s Singles as well as the Women’s Doubles Gold medal matches on 16 April 2017. —- ITTF