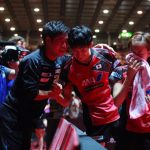 The last time the Japanese ever won a World Championships Gold, was back in 1969 when Toshiko KOWADA won gold in Munich, Germany.

The Japanese pair had a hard fought match against Chinese Taipei’s CHEN Chien-An and CHENG I-Ching in front of a capacity crowd at the Messe Düsseldorf before making the amazing feat.

“I think that is because we lost at the 2015 World Championships final, and we have practiced very hard to reach this goal now,” stated an elated ISHIKAWA who broke down in tears after claiming the gold. “We’ve played together since we were very little. That’s why understand each other. We are very good friends and we speak about personal things to each other. We encourage each other.”

YOSHIMURA added “She gave me encouraging words. And said let’s go, let try this or that, and let’s go for the gold.”

The Japanese success to claim Gold today at the Liebherr 2017 World Table Tennis Championships is a major boost to the ITTF’s bid to add a Mixed Doubles event as a fifth medal event at the Tokyo 2020 Olympic Games.

In the Women’s Singles, event, Japan’s 17-year-old Miu HIRANO was unable to repeat her success against reigning World & Olympic Champion DING Ning at the Asian Championships. DING was determined to avenge her quarterfinals loss on home soil, giving HIRANO little chance to fight back.