Home  »  OTHER SPORTS   »   Boxers to look out for at London Olympic 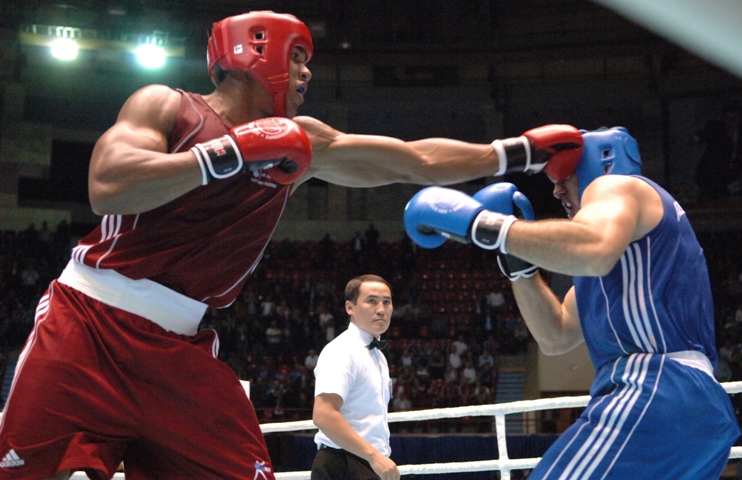 London, Great Britain, July 25, 2012: With just a few days to go until the biggest show on Earth gets underway in the British capital, we look at the men and women in each of the weight categories who can have a real impact at the London 2012 Olympic Games. In the third of this four part series, we examine the Middle (75kg), Light Heavy (81kg), Heavy (91kg) and Super Heavyweight (+91kg) men.

Ukraine’s Khytrov was in irrepressible form in Baku last year and the word is that he will be even better this summer so he will start the tournament in London as favourite. However there are many pretenders to the Olympic title with Japan’s Ryota Murata, who lost to Khytrov in the final in the Azeri capital, a serious threat to the 23-year-old Ukrainian.

Tough Irishman Darren O’Neill, a 2010 European Championships silver medallist, has the experience to really influence the top of the podium and after being handed the team captaincy, the 26-year-old will want to lead by example.

Azerbaijan’s Soltan Migitinov, who was so impressive in the World Series of Boxing first season, could prove that his added maturity could allow him to make a big impact. 2009 AIBA World Champion and Uzbek legend Abbos Atoev, who lost his first bout at the 2008 Beijing Olympic Games, carries the hope of a nation on his shoulders and at 26 years of age, this could be his last opportunity to collect the Olympic gold.

Vijender from India, also a veteran on the international stage, has the know-how to go deep in the competition, having taken an Olympic bronze medal in Beijing four years ago. Stylish Anthony Ogogo from Great Britain and the USA’s Terrel Maurice Gausha are also both in with a good chance.

It is very hard to see past the imposing figure of Cuba’s AIBA World Champion Julio la Cruz Peraza for this one. The tall orthodox 21-year-old is a terrific mover around the ring with exceptional foot-work to go with his powerful combination punching.

Adilbek Niyazymbetov from Kazakhstan made quite an impression after taking the silver medal at the AIBA World Boxing Championships Baku 2011 in his debut tournament on the international stage; the fledgling young talent is only 23 but has shown great maturity and could really challenge la Cruz Peraza for the title.

Russia’s gifted 2009 AIBA World Champion Egor Mekhontcev and Elshod Rasulov from Uzbekistan both took bronze back from the Azeri capital last year so will both be seeking to finish on top of the podium in London. In what promises to be an extremely competitive weight category, look out for Algeria’s Olympic flag bearer

Abdelhafid Benchabla, who took the World Series of Boxing by storm and won the Individual Championships in its first season. Heavy-hitter Damien Hooper from Australia was a 2010 AIBA Youth World Championships silver medallist, lost by one point to la Cruz Peraza in the quarter-finals of the AIBA World Boxing Championships Baku 2011, and at 20 is already spoken about as a future champion so maybe 2012 could be his year.

Brazil’s Baku bronze medallist Yamaguchi Falcao Florentino is another who will be keen to impress, the 21-year-old orthodox with the penetrating jab could be a dark horse in this category. Teenager Marcus Browne from the USA took first place at the AIBA American Olympic Qualifying Event Rio 2012 by defeating some quality opposition so expect the tactical American to also be pushing for honours.

Up and coming Ukrainian Oleksandr Gvozdyk, who was a revelation during this season’s World Series of Boxing, is another who could use the Olympic Games as a stage to set the boxing tournament alight with his sensational set of skills.

Another division that is expected to be dominated by the reigning Ukrainian World Champion, however Azerbaijan’s super talented orthodox fighter Teymur Mammadov will be primed to be the main challenger. Belarusian Siarhei Karneyeu never gives his opponents a moment’s peace and his ferocious style can defeat anyone on any given day.

Tervel Pulev of Bulgaria is an awesome proposition and has both the skills and the power to dominate the category. Cuban boxers can never be overlooked and this is once again the case with classy Jose Angel Larduet Gomez in the mix.

Italian superstar Clemente Russo knows what it takes at this level and this intelligent boxer will be looking to go one better than in Beijing when he took the silver medal. Russia’s Artur Beterbiev and Michael S Hunter II from the USA also have it in their lockers to make a big impact.

World Series of Boxing star Chouaib Bouloudinats from Algeria packs so much power in his punches and has the tournament experience to surprise a few of his adversaries in this tough draw.

There is talent aplenty in the heaviest weight category where both the Olympic title holder and reigning AIBA World Champion will be battling it out for supremacy. But this promises to be the most difficult category to predict with so many technical and flair boxers looking to take gold. Cammarelle and APB’s Medzhidov will have to deal with the immense power of Great Britain’s Anthony Joshua, who at only 23 years old is already being spoken about as one of the future greats, the 198cm tall, 6ft6in, Londoner has developed into one of the most feared fighters in the World.

There is also an immense threat posed by the electric Cuban Erislandy Savon Cotilla, nephew of the great Felix Savon who won three Olympic gold medals. Kazakhstan heavy-hitter Ivan Dychko, a bronze medallist at the AIBA World Boxing Championships Baku 2011, has always had huge potential and with added maturity to his approach in the last year, we could see the 21-year-old having a real breakthrough at these Olympic Games.

The emerging talent from Russia Magomed Omarov is another one who cannot be discarded; the giant won the AIBA European Olympic Qualifying Event Trabzon 2012 and last year became the European Champion after defeating Italy’s Roberto Cammarelle in the final.

The teenage sensation from Ecuador Ytalo Antonio Perea Castillo looked in devastating form at the AIBA American Olympic Qualifying Event Rio 2012, and although not the tallest, his hand speed and movement around the ring is awe inspiring, so he could really have an impact.

Tomorrow we will have a look at all three women’s categories. —- AIBA