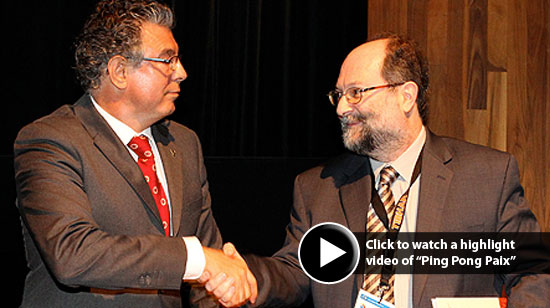 April 24, 2013: The International Table Tennis Federation’s (ITTF) “Ping Pong Paix” has been shortlisted for the 2nd year in a row for the 2013 SportAccord Spirit of Sport Award. The winner will be announced during the 11th annual SportAccord Convention in Saint Petersburg, Russia on 29 May 2013.

ITTF’s President Adham Sharara said: “I am overwhelmed with the response we are getting from the international sports community regarding the development and humanitarian work that the ITTF is doing.

We are nominated many times to different awards, and we are also winning many awards. It is not so important for us to win awards, but it reflects the appreciation that the international sports community has for our work to help those in need. That alone is the best reward.”

ITTF has a long history of using table tennis as a vehicle for social change, which commenced 40 years ago with “Ping Pong Diplomacy” that opened the doors of China.

Since the ITTF Development Program began in 1999, humanitarian projects have been an important pillar of its work. “Ping Pong Paix” is the third major project in ITTF’s “Peace through Ping Pong” series, working with Peace & Sport, Olympic Solidarity and Butterfly who donated the equipment.

The projected was held in the Great Lakes region of Africa in the disputed border region of Burundi and Congo DR, and targeted 4 villages, 2 on either side of the border to unite through table tennis.

The German Table Tennis Association (DTTB) played a key role supporting the project. In addition to providing financial assistance to the project, they also invited a delegation from the Burundian and Congolese villages to attend the 2012 ITTF World Championships held in Dortmund, Germany, as a way to provide new experiences for them and their table tennis community.

Joel Bouzou, President and Founder of Peace and Sport, whom ITTF worked closely with on the “Ping Pong Paix” project stated: “Peace and Sport is proud to have accompanied ITTF in setting and running the ITTF “Ping Pong Paix” program in Burundi and DR Congo. The nomination for the SportAccord Spirit of Sport Award illustrates the success of this initiative and echoes the strong commitment of the federation to contribute to global Peace through Sport. More than 400 children living in the most sensitive area of the Great lakes region have already beneficiated from this program.

The ITTF is a key actor of the Peace through Sport movement, and we look forward to working further hand in hand with the federation in the years to come, developing tailor made projects everywhere sport can make a difference.”

To raise money for future projects like “Ping Pong Paix”, ITTF’s Dream Building Program, which provides funding for Development, Junior and Para Table Tennis, is holding a fundraising dinner at the 2013 LIEBHERR World Table Tennis Championships on 17 May 2013 in Paris, France. If you would like to attend or donate to this great cause, please contact Kimberly Koh at [email protected] —- ITTF