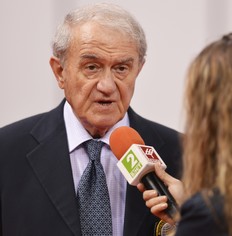 Rome (ITA) – Lausanne (SUI) / FIG Office, June 02, 2012: Italian National Day, The President of the Italian Republic, Mr Giorgio Napolitano, on the occasion of the National Day, awarded the FIG President Prof. Bruno Grandi, with the Grand Officer of the Order of Merit distinction, the highest honor bestowed by Italy.

This award is proposed by the Italian Council of Ministers and honors the career of a man totally devoted to sport, on both national and international levels. Since his first steps in a gymnastics hall, Bruno Grandi has worked tirelessly to adance in sport hierarchy as a recognized leader. He was an athlete of the national squad, coach, Head of Delegation, national and international judge, president of the Italian Gymnastics Federation, Vice President and Acting President of the Italian National Olympic Committee. In the FIG, he was elected as President in 1996, a position that he still holds today.

During his long career, Bruno Grandi has continued to fight injustice and corruption in sport. An attitude which earned him the unanimous reconnaissance of the entire international sports community.