La Jolla, California, August 15, 2017 – The International Surfing Association (ISA) is delighted to announce that Stance has agreed to continue their dedicated support of Adaptive Surfing and continue as Title sponsor of the Stance ISA World Adaptive Surfing Championship for two more years, through 2018. 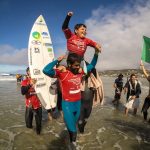 Stance, an innovative, industry-leading lifestyle brand, first joined the inaugural edition of the event in 2015 as a presenting sponsor.

In 2016, Stance stepped up their support to become the event’s first title sponsor and now has committed to continuing as the top supporter of the event through 2018, solidifying their brand’s integral, historic role in the growth and development of Adaptive Surfing world-wide.

“At Stance, we are excited to continue being a part of this amazing event,” said President and Co-Founder of Stance, John Wilson. “Each athlete has an inspiring story of perseverance, courage, and determination that epitomize our core value of human originality.

“We have watched Adaptive Surfing blossom before our eyes at the last two editions of the event. We are looking forward to contributing to this incredible community in a positive way and being part of the sport’s journey towards Paralympic inclusion. We know that with hard work these athletes can make their countries proud and get to the world’s greatest sporting stage.”

In 2015, the inaugural ISA World Adaptive Surfing Championship became the first-ever world championship platform for surfers with physical challenges. At the time, 69 athletes from 18 countries around the world gathered to unite through Surfing.

The second edition of the event in 2016 exemplified the exceptional growth of the sport, as 77 athletes from 22 countries participated in the event, breaking the record for country and athlete participation, which is expected to be broken again in 2017.

The reverberating effects of Adaptive Surfing’s growth can be felt not only at the world championship, but also at the numerous national championships around the globe that have ridden the wave of momentum created by the ISA.

ISA Member Nations such as France, Australia, Chile, Brazil, USA, Hawaii, and South Africa have all held their own National Championships to select teams for the event, with more set to do so before the upcoming World Championship.

Adding to the prestige of the event, renowned Southern California surf artist, Andy Davis, brought his passion and energy to the World Championship and created the official artwork for the third consecutive year.

“The ISA is proud and excited to make Surfing more accessible to those with physical challenges. These world-class athletes deserve a world-class platform to compete, share best practices, and crown world champions.

“The ISA’s commitment to Adaptive Surfing has never been greater, as we are spearheading the movement via working with the International Paralympic Committee, organizing the World Championship, Adaptive Surfing clinics, symposiums, and leading important development initiatives through our National Federations.

“I would like to give a huge thanks to Stance, who has shown their passion and commitment to being a socially responsible brand that makes a positive impact on the world. Stance has been a key partner in growing and developing Adaptive Surfing and we are thrilled to continue to count on their invaluable support.”

The 2017 edition of the event will follow the team competition format that debuted in 2016, which resulted in Team Brazil earning the honor of the first-ever Adaptive Surfing Team World Champion in history.

The full schedule of events for the ISA World Adaptive Surfing Championship will be announced soon on isasurf.org.

About Stance Inc.
We have turned socks into one of the world’s most exciting accessories in less than five years. Our founders saw a category that had been ignored, taken for granted, looked over, and dismissed.

By creating life into something that had been overlooked, we ignited a movement of art and self-expression that has drawn athletes, performers, and iconic cultural influencers to the brand–a group we call the Punks & Poets.

By underpinning our creative roots with a relentless focus on technical innovation, we’ve ensured that Stance socks are now found in over 40 countries on the feet of those who dare to be different. —- ISA