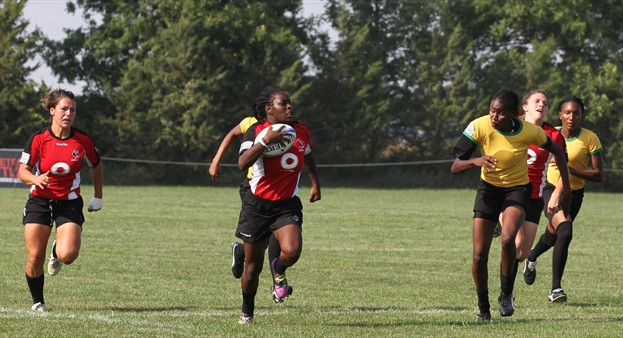 Ottawa, August 27, 2012: Canada and USA qualified for the men’s section of Rugby World Cup Sevens 2013 while Canada’s women also made it through at the North American Caribbean Rugby Association (NACRA) Sevens in Ottawa. For the men, it was the final everyone had expected between the North American rivals and it lived up to all expectations with Canada’s Sean Duke scoring the winner with a minute on the clock to claim the title for the home side. Both teams, by reaching the final, had already secured the region’s two qualification places for RWC Sevens 2013 in Moscow but the chance to get one over their neighbours ensured the final was a battle to the finish with Canada edging it 26-19.

USA had conceded just a single try en route to the final, against Mexico in a 33-7 semi final win, after beginning day two with another shutout, a 47-0 defeat of Bahamas with Hume and Jack Halalilo both scoring a brace in the first quarter-final. Canada were equally impressive in reaching the title decider, overwhelming Barbados 45-7 in the quarter finals and then keeping Jamaica scoreless in the semi final as five different players crossed the try-line in the 31-0 victory.

Eighteen men’s teams have now qualified for RWC Sevens 2013 in the Russian capital, leaving just six places to be filled from the African, Asian and South American regional qualifiers over the coming months. Meanwhile, Canada’s women blitzed all before them to win the NACRA Sevens title on home soil and join neighbours USA at Rugby World Cup Sevens 2013.

The overwhelming favourite to secure the one place on offer at the NACRA regional qualifier, Canada did so by scoring 320 points and not conceding a single point in six matches at Twin Elm Rugby Park in Ottawa. Canada picked up where they had left off on day one to add the scalp of Trinidad and Tobago to those of Mexico, Cayman Islands and Jamaica and qualify for the semi finals as top seed.

In the final, Trinidad and Tobago were no match for the free-scoring Canadians with captain Jen Kish grabbing a hat-trick of tried to ensure her side realised its target of RWC Sevens 2013 qualification.

Canada’s qualification for the women’s section of RWC Sevens 2013 now means that 11 of the 16 places have been filled, five by automatic qualifiers (Australia, New Zealand, USA, South Africa and hosts Russia) and five from the European qualifier (England, Spain, France, Netherlands and Ireland).

South America – one automatic place (Argentina) plus one qualifier

Africa – one automatic place (South Africa) plus one qualifier