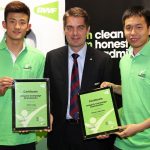 Hailing the champion athletes as “two of badminton’s distinguished sons” at a ceremony on the sidelines of the YONEX All England Open yesterday, BWF President Poul-Erik Høyer noted the players are role models through their conduct – both on and off court.

“Chen Long of China and Indonesia’s Hendra Setiawan need little introduction. They are iconic personalities in our sport.

“Both have risen to the heights of success at Olympic and World Championship level, as well as at several other prestigious tournaments globally, including these All England Championships.

“They are well respected by their peers and they represent the ideals of our integrity campaign,” said Høyer, adding that player support is extremely important for this programme’s success.

The introduction of Integrity Ambassadors is the latest step in the BWF’s integrity initiative – i am badminton – which began in 2015. The ambassadors will represent and promote the campaign’s values throughout the badminton world.

“I am happy to be an Integrity Ambassador. I look forward to performing this role,” said Setiawan, following the presentation of certificates by Høyer.

“This will be very good for badminton because our sport must be clean from doping, match-fixing and any other corruption. It is something athletes must take seriously.”

Chen Long, too, endorsed the programme whose core slogan – i am clean; i am honest; i am badminton – adorned a banner with his image.

“I am honoured to be an Integrity Ambassador and I hope all our tournaments are played fairly and that all badminton athletes compete cleanly.” —- BadmintonPhoto (Raphael Sachetat)