The InIt2WinIt Speed Jumping Series kicks off its first qualifying event on September 22, 2017 at the HITS Balmoral show in Chicago with a $25,000 Open Speed Class qualifier.

The American Royal in Kansas City, Missouri will feature a $25,000 InIt2WinIt qualifying class on October 13, 2017, and Queenie Productions will host a $20,000 InIt2WinItOpen Speed class as a qualifier on November 11, 2017 at the St Louis Hunter/Jumper Show in the National Equestrian Center in Missouri.

The final qualifying competition on the road to Omaha will be the $10,000 Monarch Casino jumper stake at the National Western Stock Show in Denver, Colorado on January 12, 2018.

Thirty-five of the top riders qualifying in these events will be eligible for the $100,000 Championship at the International Omaha 2018 on Friday, April 13.

In addition, each qualifying event organizer can issue a Wild Card to one rider of its choosing, and OEF will be able to issue Wild Cards to enter the Championship to any rider who presents a signed judge’s card with a clear round at 1.40 meters in order.

To reward consistency of performance, the rider who has earned the most money but has not placed in the top three at any of the events will also be invited to compete in the Omaha final.

“The InIt2WinIt Speed Jumping Series is part of OEF’s mission to produce international caliber equestrian events that change the way the sport is presented in this country, and to develop Omaha into a hub of the sport horse industry,” said Lisa Roskens, OEF founder and chair. 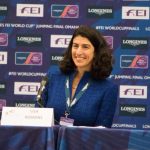 “We want to attract international championships as both educational and economic development opportunities for the community.” To fulfill its strategic plan, OEF seeks to create opportunities for high performance athletes from the Midwest and develop young riders with a clear path to higher levels in the sport.

All events will be held at the World Cup venue, the CenturyLink Center Omaha, which won rave reviews from World Cup competitors, vendors and fans. The four-day event, held on April 12-15, 2018 is designed to be the Great Equestrian Gathering in the Midwest, according to Mike West, CEO of the foundation.

“The International Omaha 2018 allows fans from throughout the Midwest to get into their cars and drive to see some of the best high performance jumping and dressage as well as enjoy a total equestrian experience,” West said.

He added that those coming to International Omaha in April will see many of the same amenities they found at the World Cup, including an extraordinary equestrian shopping experience, demonstrations and educational exhibits, outstanding entertainment and a chance to dine and relax around the warm-up ring as riders prepare for competition. www.InternationalOmaha.com. —- OEF