Home  »  OTHER SPORTS   »   IMSC signs Memorandum of Understanding to FEI 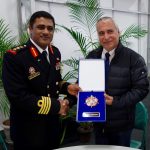 Formed in 1948, CISM is one of the largest multi-disciplinary organisations in the world and oversees sporting events for the armed forces of its 134 member countries. CISM annually organises over 20 Military World Championships for approximately 30 different sports, continental and regional competitions, and the Military World Games. CISM also invests significantly in sport for peace activities, with solidarity one of their main initiatives.

This partnership agreement will see the two organisations continue to work closely together to support the development of equestrian sport internationally.

“We are very pleased to formalize this partnership between the FEI and CISM”, FEI President Ingmar De Vos said. “Equestrian is a key component of multi-sport events worldwide and the FEI is committed to developing these relationships to continually improve and increase the offering of equestrian sport across the globe. It was very fitting to sign the agreement at the Olympic Equestrian Centre in Deodoro, Rio, which is home to Brazil’s largest military barracks, catering for more than 60,000 servicemen and women. We are looking forward to working with CISM over the coming years.”

“Equestrian is an important sport of the CISM sports programme and, with the signing of this MOU, we are looking forward to developing our relationship with the FEI over the next years and working together to further raise the standard of equestrian in the military sports’ world”, CISM President Colonel Abdul Hakeem Alshino said. “This agreement is a wonderful opportunity to exchange experiences and expertise between our two organisations.”

The FEI decided in 2012 to use Memorandums of Understanding (MOUs) to better define its relationship with the different stakeholders. The MOUs cover universal issues such as FEI recognition, FEI Rules and Regulations, horse welfare, code of ethics, commitment to democratic processes, consultation, FEI General Assembly, FEI Sports Forum and meetings, governing law, dispute resolution, communication, and implementation. MOUs have already been signed with World Horse Welfare, and clubs representing athletes, organisers and officials. Although recognition by the FEI does not entail voting rights at the FEI General Assembly, the MOUs formalise the relationship with the FEI, giving a voice to organisations working with the FEI in the development of equestrian sport.

The FEI is the world governing body for horse sport recognised by the International Olympic Committee (IOC) and was founded in 1921. Equestrian sport has been part of the Olympic movement since the 1912 Games in Stockholm.

The FEI is the sole controlling authority for all international events in the Olympic sports of Jumping, Dressage and Eventing, as well as Driving, Endurance, Vaulting and Reining.

The International Military Sports Council (CISM) is one of the largest multidisciplinary organizations in the world. CISM organize various sporting events for the armed forces of its 134 member countries and is one of the global sports organizations in which the largest number of disciplines is represented. CISM annually organizes over twenty Military World Championships for approximately 30 different sports, continental and regional competitions, the Military World Games and most recently Winter Games and World Cadet Games. CISM also invests very significantly in sport for peace activities and solidarity is one of our main initiatives. —- Martin Angerbauer/FEI