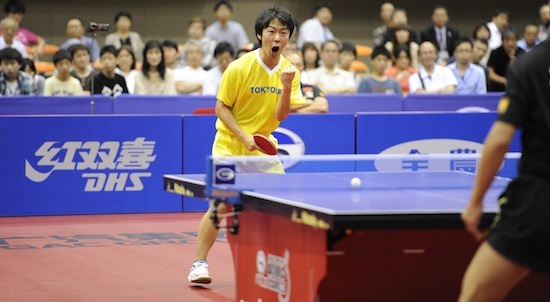 Yokohama – Japan, June 23, 2013: World number 188 Masato SHIONO has caused one of the biggest upsets in table tennis history by winning the $200,000 GAC Group 2013 ITTF World Tour – Japan Open in Yokohama, Japan, adding to the tally of gold for Team Japan.

SHIONO, who had to pay his own entry fees to participate, beat three top 30 players, including world number 6 and Doubles World Champion CHUANG Chih-Yuan (TPE), on his way to clinching his first ever title.

Furthermore, it is the first time that two players, in what is now the 18th year of the ITTF World Tour, have negotiated the qualification stage and have proceeded to reach the final of a Men’s Singles event; the first time two non-seeded players have progressed to the gold medal match.

The 27 year old defender stated after beating XU Chenhao (CHN), who was playing in his first World Tour Event, 11-3, 11-8, 11-6, 11-4 in the final: “I was so surprised to win the event, because I have never won a title in Japan before, let alone an event of this size. Playing in front of all these people and being live on national TV in Japan is a dream for me, I can’t believe it.

I even had to pay the entry fees. I am going to enter the US Open in July and try to prove that this was not a fluke and I really belong on the world stage.”

Before SHIONO’s heroics, the crowd was treated to national hero and Olympic silver medalist Ai FUKUHARA, who was also made a wax sculpture of herself at Tokyo airport, winning her first Super Series World Tour title in front of a capacity crowd at the Yokohama Cultural Gymnasium.

The World number 15 beat two highly rated Chinese opponents on the way to the final before eventually overcoming MOON Hyunjung (KOR) 11-7, 11-5, 13-11, 11-8 to clinch an emotional title.

“This is the first time I won the Japan Open, an event which is very special to me. I am very happy to win such a big event in front of so many people. The reason that I won today was the spectators, especially the ones that have followed my whole career.”

A red card for FUKUHARA’s coach for giving her advice during points only motivated her more to claim victory.

“After my coach was dismissed, I became more focused. I played without fear and showed my passion which led me to the gold.”

“We are glad, but very shocked,” said the dynamic duo.

“This is the first time we have been paired and we were not confident at all going into the final, as we were playing such strong opponents. Our combination ended up working well as we covered each other’s mistakes. We had nothing to lose and no pressure which helped us a lot.”

In the Women’s Doubles, the young Chinese pair of GU Yuting and ZHOU Xintong were too strong for the number one seeded duo from Chinese Taipei CHENG I-Ching and HUANG Yi-Hua. They won 11-3, 6-11, 11-4, 11-7 despite playing together for the first time here in Yokohama.

“Since this is the first time we have played as a pair we did not have much practice together, so we are glad to win the such a prestigious title. The Chinese Taipei pair was very good and we were nervous going into the match, so we are very happy were able to win,” stated the two future superstars.