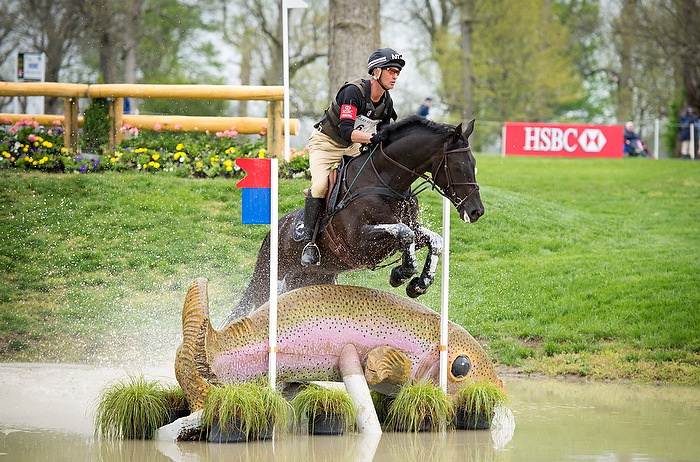 By Kate Green, Lausanne, April 28, 2013: Nicholson, Andrew Nicholson’s Cross Country performance on Quimbo was the stuff of dreams at the Rolex Kentucky Three-Day Event (USA), third leg of the HSBC FEI Classics™ 2012/2013. The New Zealander is now deservedly holding onto first and second places at the top of a considerably altered scoreboard with a fence in hand over third-placed Buck Davidson (USA).

Nicholson put in an excellent early round on a matured Calico Joe, now in second place, to finish bang on the optimum time, but his performance at the end of the Cross Country on Libby Sellar’s talented 10-year-old was simply breathtaking – a joy to watch and a master class in accurate, sympathetic horsemanship in which horse and rider were as one throughout.

“That was probably my most exciting ride ever,” said an understandably elated Nicholson. “Quimbo is an unbelievable horse. For the first time at this level, that was just an amazing performance. When I got to eight minutes, I said ‘Let’s get serious’ and he amazed me as he went faster and faster at the end.”

Dressage leader William Fox-Pitt (GBR) and Chilli Morning bowed out after the stallion, which had been jumping carefully, took a good look at the rails into the first water complex and stopped. But Fox-Pitt proved an exemplary pathfinder on his first ride Seacookie TSF and has moved up six places to fourth with the German-bred gelding, just 1.4 penalties behind Davidson.

Fox-Pitt described Chilli Morning’s exit as “one of those things. Maybe he over-jumped the fence before and gave himself a bit of a shock. There was no point carrying on. He’s a 13-year-old and wasn’t here for the experience.”

Despite the hiccup with Chilli Morning, he declared the course: “Superb. Derek di Grazia [designer] is really stamping his mark here, giving the riders lots to think about with tricky distances and tricky little turns. He is encouraging riders to think on their feet, which is fantastic.”

Nicholson concurred, saying: “I’d like to congratulate Derek. The course was big and horse-friendly. He started off by getting us thinking positively with big wide fences and then there were technical ones like the hollow at fence six where you had to sit on your backside and work a bit. He mixed it up well.”

In a day of commendably positive riding on perfect footing, Will Faudree (USA) and Pawlow have climbed six places to fifth; fellow American Lynn Symansky flew round on Donner to rise 13 places to sixth and New Zealand’s Olympic team bronze medallist Jonelle Richards and The Deputy have risen nine places to seventh.

Buck Davidson, whose father, Bruce was one of the most successful riders around Kentucky including winning individual gold at the 1978 world championships there, looked justifiably ecstatic at the end of the day. He thrilled both his family and a large home crowd by riding three committed clear rounds; he is now also in eighth place on the young horse Mar de Amor.

James Alliston, a British rider based in California, would be far less experienced than the likes of Nicholson and Fox-Pitt, but he also achieved three clears, and is in ninth place on the former Oliver Townend (GBR) ride Tivoli, ahead of fellow West Coast rider Kirsti Nunnink (USA) on her gallant grey mare R-Star.

There were 27 clear rounds from the 30 finishers, 11 of which were inside the optimum time of 11 minutes 21 seconds; seven riders were eliminated and five retired, including Mary King (GBR) on Fernhill Urco following a refusal at the brush fence coming out of the Head of the Lake (fence 20).

Alexandra Knowles, fourth after dressage, was eliminated for three refusals on Last Call after losing impulsion at the sunken road at fence 13; Marilyn Little (USA), equal fifth, was unseated when RF Demeter pecked after the third of a complex of three spreads (fence 17); Becky Holder (USA), seventh, was unshipped when Can’t Fire Me crumpled on landing over the duck fence (fence 24), and Shandiss McDonald (CAN), ninth, slipped from the reckoning with 20 time penalties on Rockfield Grant Juan.

Coming into the final jumping phase, it looks as though Andrew Nicholson will not only easily retain his lead in the HSBC FEI Classics™ – so far, only British riders have won the title before – but will set up a historic first head-to-head, with William Fox-Pitt, in the Rolex Grand Slam next weekend at the Mitsubishi Motors Badminton Horse Trials (GBR) (3-6 May).

At the centre of HSBC’s sponsorship is a commitment to the development of the sport of Eventing at every level. As part of its support of the HSBC FEI Classics™, HSBC has introduced a Training Bursary. This is a unique award which is presented to the highest placed rider never to have previously completed a 4-star level event. The winning rider receives a training voucher to the value of US $1,000 to be spent on sessions with a trainer of the athlete’s choice approved by the FEI and National Federation.