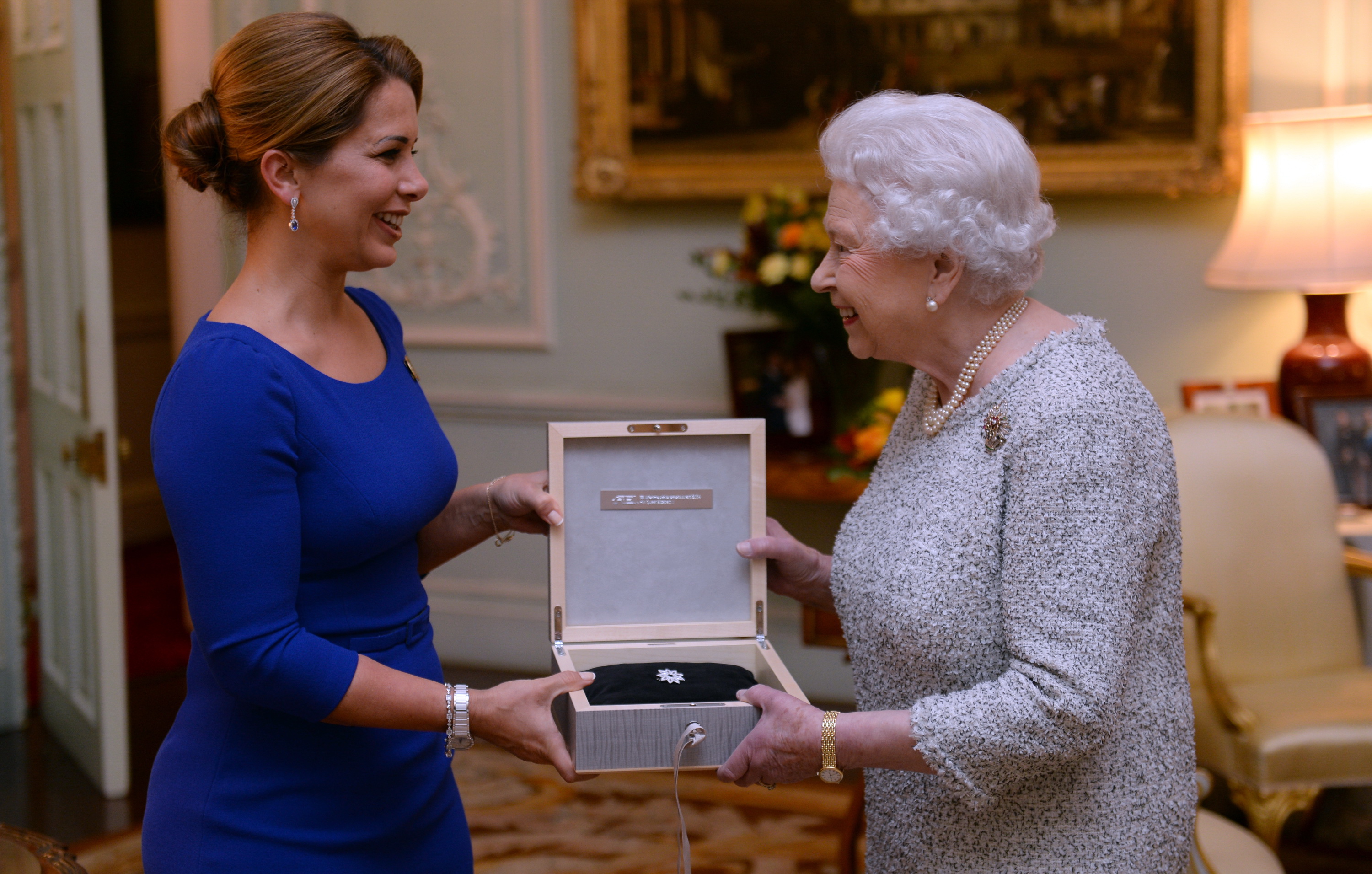 London (GBR), Nov 26, 2014: Her Majesty Queen Elizabeth II today became the first recipient of the FEI Lifetime Achievement award in recognition of her leading role as supporter of equestrian sport throughout her reign as British monarch.

The award was presented to Her Majesty by FEI President HRH Princess Haya at a ceremony in Buckingham Palace this afternoon in the presence of former FEI President the Duke of Edinburgh Prince Phillip, and Keith Taylor, Chairman of the British Equestrian Federation.

Horses featured in The Queen’s life from a very young age. She had her first riding lesson in the private riding school at Buckingham Palace Mews in January 1930, when she was just three years old and was given her first pony, the Shetland mare Peggy, by her grandfather King George V on her fourth birthday.

One of The Queen’s favourite horses was the mare Burmese, a present from the Royal Canadian Mounted Police in 1969 when they came to perform at the Royal Windsor Horse Show. The Queen rode Burmese side-saddle for 18 years at the Trooping the Colour ceremony, which celebrates the Sovereign’s birthday. The President’s Trophy, presented by Prince Philip for many years to the winning country in the FEI Nations Cup™ series, was a bronze of the Queen and Burmese.

In the Thoroughbred world, horses bred by The Queen have won more than 1,600 races, and, of the British Classics, only the Epsom Derby still eludes Her Majesty. She also breeds Shetland, Highland and Fell ponies to ensure the traditional bloodlines in these native breeds are preserved and enhanced.

As well as The Queen’s enduring love of racing, breeding and equestrian sport, the British Royal Family has a long history linked to the horse. The Duke of Edinburgh played polo until 1970 and then took up carriage driving the following year, and also played a key role in compiling rules for the international sport early in his 22-year tenure as FEI President. The Prince of Wales, Prince Charles, and two of The Queen’s grandsons, Princes William and Harry all play polo. The Queen also plays host to the annual Royal Windsor Horse Show, which features international Jumping, Dressage and Driving, and where many of the Queen’s home-bred native ponies line out in the showing classes.

Equestrian sport celebrated 100 years in the Olympic Movement at London 2012, where The Queen’s granddaughter Zara Phillips claimed team silver in Eventing. Zara Phillips won team and individual gold at the FEI World Equestrian Games™ in 2006 and was also crowned European champion in 2005, following in the footsteps of her mother, The Princess Royal, who won the European title in 1971 on Doublet, a horse bred by the Queen out of one of Prince Philip’s polo ponies. Princess Anne, also a former FEI President, is an IOC Member and President of the British Olympic Association, and competed at the Montreal Olympic Games in 1976, the first member of the British Royal Family to compete at Olympic level.

The Queen’s cousin Margaret Rhodes, interviewed last year for a BBC documentary, The Queen: A Passion For Horses, believes that the importance of horses in The Queen’s life cannot be overestimated: “When she became Queen, she had to sacrifice an awful lot of emotions and thoughts of the future, but with horses it’s another world in that it reduces you to just the person in relation to the animal, and you’re not a Queen, you’re just a human being.”

“Her Majesty Queen Elizabeth is a life-long lover of horses who has inspired millions around the world and I am honoured to be able to present the first-ever FEI Lifetime Achievement award to Her Majesty on behalf of the FEI today”, HRH Princess Haya said after the presentation in The Queen’s audience room at Buckingham Palace. “She is a true horsewoman, who still rides whenever State business allows, and her knowledge of breeding and bloodlines is incredible. The bond between The Queen and horses is truly extraordinary and I can’t think of anyone more fitting to receive this very special FEI award in the Year of the Horse. I am very proud to be giving this award on behalf of the FEI family.”

“Horses have played such a huge part in the life of The Queen, and it is a family passion shared particularly with her husband and the two world-class champions in her daughter and granddaughter”, said Keith Taylor. “The Queen has an incredible in-depth knowledge of breeding, both Thoroughbreds and native ponies, and is patron of the British Horse Society, the Fell Pony Society, the Highland Pony Society, the Shire Horse Society, the Welsh Pony and Cob Society and the Thoroughbred Breeders’ Association. It’s impossible to think of the Royal Family without thinking of horses. We are truly blessed to have a sovereign who values the horse and its many types so highly.”

The FEI Lifetime Achievement award was created by Princess Haya in 2014, her final year as FEI President, to acknowledge an individual who has inspired generations across the global equestrian community. Recipients of this award are recommended by the FEI Executive Board, and the FEI Bureau was delighted that the first-ever award has gone to Her Majesty Queen Elizabeth II.

The award is a stunning white gold and diamond brooch of nine interlinked horseshoes, created especially for today’s presentation, and mirroring the insignia of the FEI Awards.

The FEI Lifetime Achievement Award is part of this prestigious scheme, which was launched in 2009 to reward excellence, commitment, dedication and courage. Other global equestrian heroes will be honoured at a glittering Gala Dinner during the FEI General Assembly in Baku, Azerbaijan on 14 December. The shortlist of nominees and full information on the FEI Awards 2014 and past winners is available at www.feiawards.org —- Image © Press Association