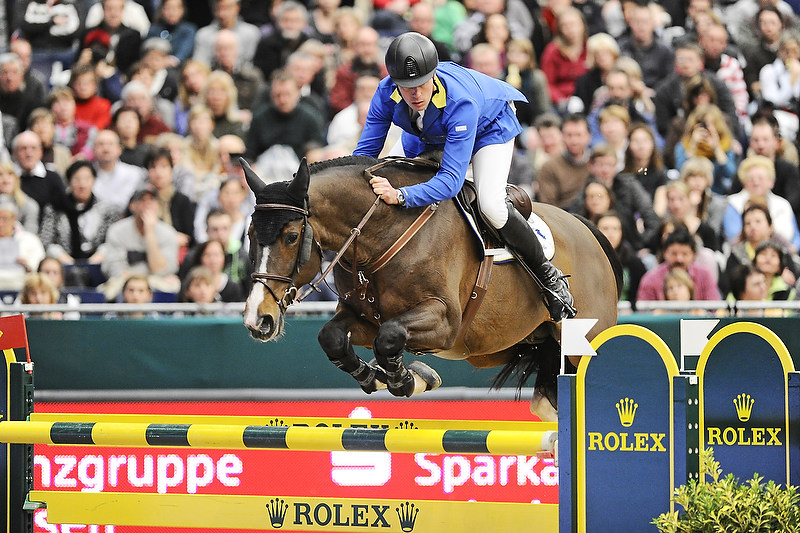 By Louise Parkes, Switzerland. April 11, 2012: In the long and distinguished history of the Rolex FEI World Cup™ Jumping series, no country has ever won the title on more than four consecutive occasions. American riders dominated throughout the early years with seven victories over the first nine seasons, including four between 1980 and 1983, but as the 37 representatives from 19 nations gather at ‘s-Hertogenbosch (NED) next week for the 34th annual decider, it seems Germany is poised to break the mould (GERMANY POISED).

Already with the greatest number of wins to their credit, a total of nine since Ludger Beerbaum’s success with the great mare Ratina Z in Gothenburg (SWE) back in 1993, German competitors have held a firm grip on the coveted crown in recent years. They have been denied only twice since Otto Becker (Dobel’s Cento) held the trophy aloft in Leipzig (GER) 10 years ago, and for the last four seasons they have been all but unstoppable.

Defending champion, Christian Ahlmann, followed in the footsteps of Marcus Ehning in 2010 and Meredith Michaels-Beerbaum’s back-to-back double of 2008 and 2009, and it is no coincidence that the latter two are amongst the elite group of just four riders with three Rolex FEI World Cup™ Jumping titles to their credit.

Control, accuracy, speed and the ability to make split-second decisions are key to success in this most demanding of sporting contests during which the close confines of indoor stadiums test the courage, stamina and character of the greatest equine stars.

German riders don’t fall short when it comes to precise judgment, and if Ahlmann and his stallion, Taloubet Z, can repeat their success of last season then they will become just the sixth horse-and-rider partnership to record a back-to-back double of wins since the series began in 1978.

Canada’s Ian Millar and Big Ben were first to do so in 1988 and 1989. Great Britain’s John Whitaker and Milton followed suit in 1990 and 1991. Austria’s Hugo Simon, the man who won the title in the inaugural 1978/1979 season, returned to do it in 1996 and 1997 with ET, and Brazil’s Rodrigo Pessoa and Baloubet du Rouet were victorious in 1998 and 1999 before coming back again in 2000 to place themselves in a league of their own. No other horse-and-rider duo has ever scooped three consecutive Rolex FEI World Cup™ Jumping titles.

All of the multiple winners were riding horses of legendary status, including triple champion Michaels-Beerbaum, whose double in 2008 and 2009 was recorded with the super-horse Shutterfly.

The taking of the Rolex FEI World Cup™ Jumping title is a watershed in every rider’s career, and, true to tradition, this year’s Final line-up will no doubt expose much previously-undiscovered talent. Competitors from 13 leagues around the globe have worked hard to earn a place at the Brabanthalle in ‘s-Hertogenbosch which has, only once before, played host to this event. That was back in 1994 when Jos Lansink, then flying the Dutch flag but now competing for Belgium, was the hero of the hour when victorious with Libero H.

The countries represented at next week’s Final will be Australia, Belgium, Brazil, Canada, Denmark, Egypt, Estonia, France, Germany, Ireland, Japan, Lithuania, The Netherlands, Portugal, Qatar, Russia, Switzerland, Sweden and the USA. And it could well be the Americans who put a stop to the German gallop.

A total of nine riders have qualified from the US East and West Coast leagues, and they are a formidable bunch with a depth of experience and a will-to-win that is second to none. Led by East Coast league champion Margie Goldstein-Engle and West Coast winner Richard Spooner, the squad also includes Beezie Madden, who has a spectacular string of horses at her command.

It is now 25 years since Katharine Burdsall and The Natural took the title for the USA for the seventh time. It seems a US victory must be on the cards again sometime soon.

However they’ll need to be on top of their form to see off the likes of 2011 FEI European Champion Rolf-Goran Bengtsson (SWE), whose performances throughout this Rolex FEI World Cup™ Jumping Western European League qualifying season have been electrifying. Switzerland’s Pius Schwizer was also right on form when winning the opening two legs at Oslo (NOR) and Helsinki (FIN), and Frenchman Kevin Staut was utterly committed to the series when appearing at every one of the 12 tough qualifying rounds, winning on his home turf at Bordeaux in February. He promised that day to bring the great grey mare, Silvana HDC, to the Final, and they are likely to pose a powerful challenge to all-comers next week.

And with Olympic champion, Eric Lamaze from Canada, and Australia’s Edwina Tops-Alexander, who is riding the crest of a wave after victory in the opening leg of the Global Champions Tour series in Doha (QAT) last Saturday, amongst the contenders, it will truly be a clash of champions. The question is whether any of them can overcome the German contingent.

it’s a crack German line-up, with former FEI European Champion Marco Kutscher hot to trot after his double of successes at the qualifiers in Zurich (SUI) and Gothenburg (SWE) over the last few months. It may be 19 years since Ludger Beerbaum held the trophy in his hands, but he showed he has lost none of his edge when topping the podium at Stuttgart (GER) in November, while defending champion Ahlmann cruised into the winner’s enclosure in January at Leipzig (GER). With Philipp Weishaupt and three-time champion Marcus Ehning as back-up, it seems the Germans will be the ones to beat, and their quest for a record-breaking fifth consecutive win seems a very achievable goal indeed.

The 2011/2012 Rolex FEI World Cup™ Jumping Final will have an extra edge as it paves the path towards a glorious Olympic summer in London (GBR). Who carries the most coveted title of indoor international jumping into the 2012 Olympic contest remains to be seen….

The venue is The Brabanthalle at ‘s-Hertogenbosch, The Netherlands, which is the only Dutch venue ever to stage this fixture before – in 1994 when Jos Lansink, then riding for The Netherlands but now competing for Belgium, took the title.

A new record will be set if a German rider can win the competition for the fifth consecutive season.

The top 5, and 15 of the top 20 riders on the latest Rolex Rankings, will be in action at ‘s-Hertogenbosch next week. View the Rolex Rankings here

The first winner of the FEI World Cup™ Jumping title was Austria’s Hugo Simon who came out on top at the end of the inaugural 1978/1979 season at Gothenburg (SWE) riding Gladstone.

Only one rider has ever recorded a hat-trick of back-to-back wins with the same horse – Brazil’s Rodrigo Pessoa (Baloubet du Rouet) 1998, 1999, 2000. Image © FEI/Karl-Heinz Frieler.