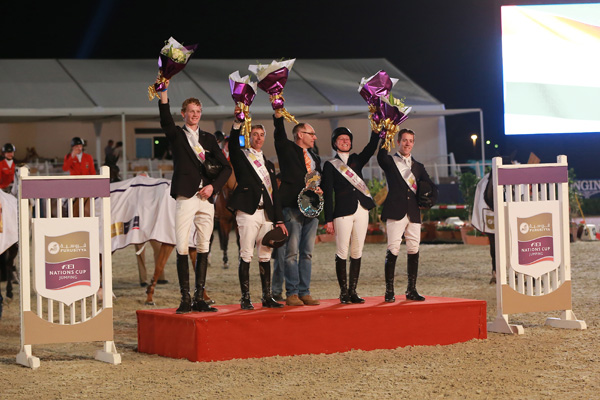 Dubai – Feb 21, 2013: The first leg of the Furusiyya FEI Nations Cup™ Jumping series lived up to expectations today when, in a real roller-coaster of a competition, The Netherlands won through and both Saudi Arabia and Qatar qualified for the series final. There were three teams from the Middle East Region vying for the two qualifying spots on offer, but it was the host nation from the UAE that missed the cut when finishing behind Saudi Arabia and Qatar.

It was a career-defining day for 19-year-old Dutchman, Frank Schuttert, who helped his side to success with one of four double-clear performances over a tough track set by Venezuela’s Leopoldo Palacios. And it was a heart-warming day for Dutch Chef d’Equipe, Rob Ehrens, as his mainly youthful team looked so full of promise as they secured their convincing victory. Schuttert was joined by 24-year-old Maikel van der Vleuten and 26-year-old Aniek Poels. Maikel’s 49-year-old father, Eric van der Vleuten, also ensured it was a Dutch family affair when adding the essential depth of experience as pathfinder.

Great Britain and Germany tussled for runner-up spot in the closing stages but had to share it in the final analysis, while France finished fourth ahead of Saudi Arabia in fifth, Qatar in sixth and the UAE in seventh place. With 35 first-round faults, Egypt didn’t make it into the second round, while Ukrainian chances, already badly hampered by the withdrawal of third-line rider Oleksandr Onischenko, were completely dashed when Ferenc Szentirmai was eliminated to leave them also on the sidelines after the first round.

Palacios presented them with a 12-fence challenge that began with a triple bar followed by a wall and then the Longines oxer – marking the Swiss watchmaker’s role as Official Timekeeper of the Furusiyya series – before turning to the double at fence four. From there the track increased in difficulty with every fence, the skinny vertical at five leading to the open water at six and the related vertical at fence seven. A pole over the open water seemed to take some horses by surprise, but it was the triple combination that followed another big oxer at fence eight that proved the most troublesome obstacle on the course. The gold-coloured poles fell frequently here when the distance didn’t come up comfortably, and the bright green oxer at fence 10 also proved influential as did the penultimate Furusiyya planks and the final oxer.

Germany held the lead at the halfway stage carrying just the single time penalty collected by pathfinders Jorg Naeve and Calado and discounting Holger Wulschner’s single error with Cavity G after clears from both Katrin Eckermann (Carlson) and Patrick Stuhlmeyer (Lacan 2). The Dutch were lying second with just four faults, while France was in third place carrying eight, and Great Britain and Saudi Arabia were next in line with nine faults apiece. Qatar had already collected 21 faults and the UAE 26 and these seven teams went through to the second round in which Germany’s lead was immediately undermined by an 11-fault result from Naeve.

A clear from Van der Vleuten Senior meanwhile bolstered Dutch chances, but the French fell away when having to add eight more to their tally as single errors from both Matthieu Billot (Pardoes) and Edouard Couperie (Nectar des Roches) had to be included after Frederic David (Equador van’t Roosakker) returned with 15 faults, including four for a stop at the last element of the triple combination. French anchorman, Michel Hecart, distinguished himself however with a double-clear from Quatrin de la Roque.

The Saudi Arabian team couldn’t improve their position when the four faults collected by both Kamal Bahamdan (Delphi) and Ramzy Al Duhami (Bayard van de Villa Theresia) had to be taken into account after HRH Prince Abdullah Al Saud (Davos) lowered both the vertical at fence five and the Furusiyya planks. London 2012 Olympic bronze medallist and Alltech FEI World Equestrian Games™ individual silver medallist, Abdullah Al Sharbatly, produced the single Saudi clear this time out with Larkhill Cruiser, but the country that claimed Olympic team bronze last summer had to settle for a minor placing today with a final total of 17 faults.

Back with a Vengeance

As the second round evolved the British fought back with a vengeance despite a second elimination for second-line rider Yasmin Pinchen, whose 10-year-old mare, Van de Vivaldi, had already lowered fence five and the second element of the triple combination before throwing in the towel at the brightly coloured oxer at 10. The mare had resolutely refused to take this fence on in the previous round also, and could not be persuaded to like it any better at her second attempt.

It was the brilliant double-clear from first-line rider Robert Smith (Voila) and a second-round clear from Joe Clee and Diablesse de Muze along with just a single time penalty for Tina Fletcher and Hello Sailor that hauled the British back into contention. Fletcher’s time-fault would prove costly however, as without it her side would have headed the Germans who were forced to add nine more faults when Katrin Eckermann’s grey, Carlson, hit both the glaring green oxer at 10 and the final fence while also picking up a time fault. Team-mate, Patrick Stuhlmeyer, produced a second copybook clear while Wulschner also left all the poles in place, but their 10-fault tally would leave them on level-pegging with their British rivals.

The Netherlands’ Aniek Poels hit the penultimate planks, but when Schuttert completed the second of his clear rounds and Maikel van der Vleuten left all the timber intact this time out, their zero second-round score, and total of four, proved plenty good enough for victory.

Schuttert was thrilled with such an amazing result on his senior team debut. “Everything has been great for us here, we are an almost young team and we have mostly young horses so it’s perfect!” he said with a laugh afterwards. “And this is such a fantastic place here in Al Ain, everyone has been wonderful to us!”.

Talking about his horse, Winchester, whose high head-carriage and feisty spirit suggests the stallion is not the easiest of rides, the tall young rider explained, “I’ve had him for two years now and he is a quality horse – he just really wants to fight for me and he’s not at all as difficult as he looks!”

Schuttert said he and his Dutch counterparts were feeling confident after a good preparation yesterday. “The horses all jumped really well so we knew they were in good form. That helps a lot when you come to a show and you know your horses are feeling strong, it gives you confidence,” he said.

And asked if he hopes that today’s performance will lead to more appearances for the Dutch team over the coming months he replied – “I’m still only 19, so I’m still a Young Rider and my target now is to compete at the Young Rider European Championships this summer – that’s my goal.”

Meanwhile the excitement of the inaugural Furusiyya FEI Nations Cup™ Jumping season moves to Wellington in Florida, USA next week for the second leg of the series which takes in 22 qualifying legs leading to the Final in September 2013.

The 2013 season comprises 22 qualifiers in as many countries.

41 nations will seek a place at the Furusiyya FEI Nations Cup™ Jumping Final 2013 which will take place in September.

Furusiyya is the brand name for the commercial arm of the Saudi Equestrian Fund which finalised a 16 million Euro four-year sponsorship package with the FEI in November 2012.

The six top teams, along with the host nation UAE side, qualified for today’s second round.

The next leg of the Furusiyya FEI Nations Cup™ Jumping series will take place in Wellington, Florida, USA on Friday 1 March. For details on the US event contact Press Officer Jennifer Wood, Email [email protected] —- FEI / by Louise Parkes