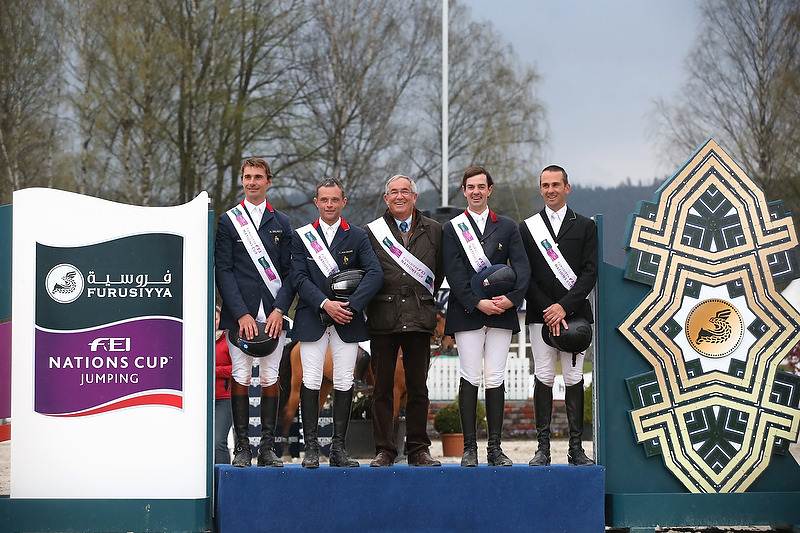 Drammen – Norway, May 10, 2013: Just seven days after coming out on top in Lummen, Belgium, French riders recorded their second win of the inaugural Furusiyya FEI Nations Cup™ Jumping series at Drammen, Norway today. However this time they were pushed just about as close as it could get, with the runners-up from The Netherlands keeping them under immense pressure right to the very end of a gripping competition.

It was a last-to-go, foot-perfect run from French anchorman, Timothee Anciaume that clinched it. “I had a lot of pressure on my shoulders coming into the second round, but the objective had been clearly set by our Chef d’Equipe, Philippe Guerdat. This is a new team, but we came here to win!” the 34-year-old Frenchman pointed out.

Sweden finished third ahead of the host nation of Norway in fourth, while Italy slotted into fifth ahead of Finland. At this Europe Division 2 leg of the 2013 Furusiyya series, just six of the eight competing nations returned for the second round, and it was the sides from Russia and Belarus that watched from the sidelines when squeezed out after their opening effort.

The Longines timing equipment played an important role throughout the afternoon, as the time-allowed of 80 seconds proved very difficult to get. And the Russians were unfortunate to miss their chance to return for the second round. They were on level-pegging with Finland after collecting 16 faults in round one, but their slower times saw them having to settle for seventh at the end of the day.

Course designer, Germany’s Stefan Wirth, set them an inviting course with a few interesting questions. Straightness and balance were key to a clear jumping round, and many of those who angled the oxer at fence four paid the price, while many more took the following left-handed turn to the Longines double too sharply and found themselves off-balance over the opening triple bar and the following vertical. It had been expected that the line from the 1.50m x 1.60m oxer at six to the open water at seven and the vertical at eight would present some problems, but although there were a few wet hooves, the distances rode perfectly for most.

It was the triple combination, three fences from home that was the bogey of the day. Following the inviting previous oxer, riders were obliged to rein in their horses and approach with caution in order to correctly negotiate the single stride between the opening vertical and the oxer middle-element and the following two strides to the final vertical here. It had a significant impact in the first round, and continued to play its part again as round two unfolded.

The tight time-allowed however was also a major influence, as Stefan Wirth confirmed after the competition. “It was one of the deciding factors today alright” he said. “I noticed that experienced riders had less problems, and also there were less time faults in the second round” he added.

With three first-round clears, the French were in control by the halfway stage, only the third-line combination of Francois-Xavier Boudant and the 12-year-old Amadeus Z faulting at the first element of the Longines double at fence five. But the Dutch were stalking them closely, carrying just two time penalties after both Suzanne Tepper (KM Wish) and Henk van de Pol (Liberty Antara) each exceeded the 80-second time limit, while experienced pathfinder, Eric van der Vleuten, produced the only other fault-free first tour of the track.

Sweden lay third despite a difficult pathfinding effort from Royne Zetterman who returned with 17 faults on the board partnering the nine-year-old Echo de Laubry. Single time penalties from Emma Emanuelsson (Titan) and Peder Fredricson (H&M Cash In) were the only additions to the four faults collected by Douglas Lindelow and Udermus for a mistake in the middle of the triple combination. So with six faults the Swedes were still well in the frame going into the second round, while the host nation was only two faults further adrift, counting the five collected by Dag Ove Kingsrod (Dimaro Vd Looise Heide) who also fell victim to the middle element of the triple combination as well as the timing equipment, and the two time faults picked up by Victoria Gulliksen (Urval) and the single penalty registered by her father, Geir Gulliksen (Edesa S Banjan).

The Italians were in fifth with 14 faults and Finland was in sixth carrying 16 as round two began, but only two of the four Finnish team members returned to the arena while, despite a much-improved single time penalty from anchorman Luca Moneta (Connery), the Italians couldn’t improve their situation when adding nine more to their scoreline.

The Norwegians lost their grip with the addition of 10, and when Zetterman endured another punishing 13-fault result it seemed Swedish chances were also dashed. But the potential of 23-year-old Lindelow was clearly evident in a foot-perfect second effort while Swedish Chef d’Equipe, Pether Marene, was given a further boost by the determination shown by Emanuelsson. She looked well on her way to another fine jumping round until a strong check before the triple combination left her 10-year-old partner, Titan, without any stride at all. Having sent poles flying at the first element, the 28-year-old rider pulled up and as soon as the course was ready she re-presented the brave grey who nonchalantly soared over all three elements this time around to cross the line with just six faults after a superb recovery. And when Fredricson went clear that was all they had to add to complete with a final tally of 12.

It would be a fierce fight to the finish between the Dutch and the French however, pathfinding Frenchman Nicolas Delmotte recording the second part of his double-clear with Number One d’Iso Un Prince, but second-line rider Mathieu Billot, collecting nine faults this time around. And the tension became almost unbearable when Francois Xavier Boudant and Amadeus Z, clear first time out, made it all the way to the penultimate oxer only to leave that on the floor.

By this stage Van der Vleuten had returned a four, Tepper had picked up just one more time penalty and third-line rider Peter Bulthuis returned clear with Atlanta. So although Henk Van de Pol’s Liberty Antara put a toe in the water, the final Dutch score of seven faults really put it up to the final French pair. With the three best scores to count, France needed to drop the nine collected by Billot, and even one mistake from anchorman Timothee Anciaume would result in an eight-fault final result, presenting The Netherlands with victory.

Anciaume didn’t flinch however, even though it was the very first CSIO and first Nations Cup for his nine-year-old horse, Quorioso Pre Noir. Asked afterwards what it felt like to be under such enormous pressure, he said, “I just really focused on my ride and my round, I didn’t let myself think of faults or results, but I concentrated on feeling confident. I knew I could afford a time fault, so I just had to focus on what I was doing”. As he broke the beam inside the time, the job was done, and French Chef d’Equipe, Philippe Guerdat, was rightly delighted.

Talking about his team, Guerdat said afterwards, “I asked Timothee to go last because he is the most experienced rider in today’s team”. And he was very happy with the performances of the rest of his side. “For Francois-Xavier Boudant this was his first Nations Cup. He had no experience at this level, so it is really good for him to start with a winning result!” he said. “Nicolas Delmotte did a really good job there, and he definitely has a horse for the future, and Mathieu Billot is our youngest rider today. He did very well. He was a European Junior Champion eight years ago and will definitely be one for the future” he added. There were just two-double clear performances recorded today, and both by French riders – Nicolas Demotte and Timothee Anciaume.

For Norwegian Chef d’Equipe, Ulf Storemark, today was also a great day. Like so many other nations, the Norwegians are chasing points in this first Furusiyya FEI Nations Cup™ inaugural season, and the 75 they collected this afternoon have moved them into third place at this early stage on the Europe Division 2 league table. Sweden heads that leaderboard, with Finland in second and Belarus in fourth.

It was a wet and cold day in Drammen today, but the excitement of another thrilling clash of nations ensured the spectators had plenty to keep them warm. And now the series heats up a whole lot more as the first leg of Europe Division 1 takes place next Friday at La Baule, where the French will be hoping to make it three-in-a-row with victory on their home turf.

5 countries – Belarus, Finland, Italy, Norway, Russia and Sweden – were battling for points towards the Final which will take place in Barcelona, Spain in September.

Father and daughter, Geir and Victoria Gulliksen, competed for the host nation team.

This was the second French win in the 2013 Furusiyya series. France also came out on top in Lummen, Belgium last Friday.

The youngest horse in today’s competition was the 7-year-old Cue Channa ridden by Finland’s Sebastian Numminen.

The oldest horse in the class was the 16-year-old Pardoes ridden by Mathieu Billot for the winning French team.

“Furusiyya” (Arabic: فروسيه) this single Arabic word conveys so much, embracing the idea of horsemanship, chivalry, and equestrian knowledge in general. The term is a derivation of faris, or horseman and faras, a horse.

Longines is the Official Timekeeper of the Furusiyya FEI Nations Cup™ Jumping series.

Longines has been based at Saint-Imier (SUI) since 1832. Its watchmaking expertise reflects a strong devotion to tradition, elegance and performance. It has generations of experience as the official timekeeper at world championships and as a partner of international sports federations.

Longines’ passion for equestrian sports began in 1878, when a timepiece was made with a horse and jockey engraved on the watch face. Over the years, the brand has built strong and long-lasting links with equestrian sports. In 1926, for the first time, the brand was involved as timekeeper for the Official International Equestrian Competition of Geneva. Today, Longines’ involvement in equestrianism includes Jumping, Endurance and flat racing.

Longines is a member of The Swatch Group S.A., the world’s leading manufacturer of horological products. With an excellent reputation for creating refined timepieces, the brand, whose emblem is the winged hourglass, has outlets in over 130 countries. —- By Louise Parkes & Photo: FEI/Roland Thunholm.