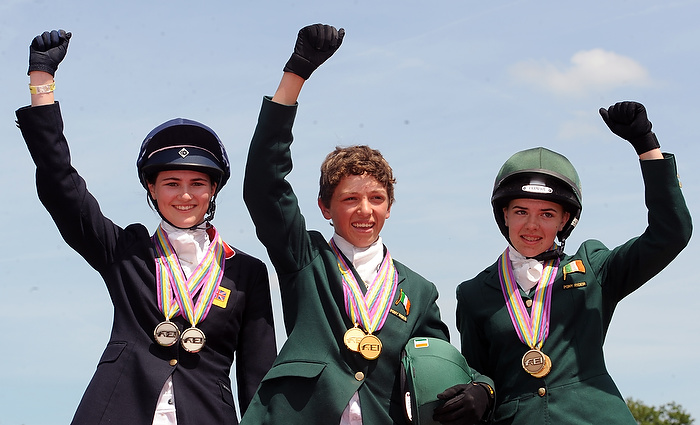 Lausanne (SUI), August 23, 2012: Germany took Dressage Team and Freestyle gold, the British once again dominated in Jumping and the Irish recorded their first-ever team success while also claiming two of the three individual medals in Eventing at the FEI European Pony Championship 2012 in Fontainebleau, France. Sanne Vos claimed the Individual Dressage title for The Netherlands, but was pipped by Germany’s Semmeike Rothenberger in the closely fought Freestyle by the smallest of margins.

The standard of competition in all disciplines continues to astound, and the battles for the ultimate prizes were intense. As the weekend drew to a sunny conclusion, Championship Director, Andre Bonneau announced that more than 7,000 spectators turned up to watch Eventing cross-country while 5,000 attended the final Eventing jumping phase. “It is a tribute to the participants” he said.

Rothenberger and fourth-line rider Lena Charlotte Walterschei were also members of the 2011 winning side, but the latter, who took individual double-silver 12 months ago, produced the drop score of 69.564 this time around.

The Netherlands’ Sanne Vos and the 9 year old TC Champ of Class challenged strongly from the outset, with a score of 75.769 in the team event which helped secure silver ahead of Denmark. And the 16 year old Dutch girl edged Rothenberger out to take the Individual title when racking up a mark of 78.707. Rothenberger and the 10 year old Golden Girl were close behind with a score of 78.317 while Vos’ team-mate, Rosalie Bos, claimed the bronze with Paso Double – a particularly exceptional result considering this pony is still only a six-year-old.

When it came to the Freestyle however, Rothenberger was back on top, although the judges marks showed Vos placed first by three out of the five. With 81.975 on the scoreboard, the prodigously talented young German had the edge by just 0.225 points, while Rosalie Bos slotted into bronze medal position with 78.125. Fourth place in both the Individual and Freestyle classes went to Denmark’s Victoria Vallentin and Natalina.

The British continued their domination of the Jumping Championship with another convincing team win for a line-up that included two of last year’s gold medal winning side.

Amy Inglis and Jessica Mendoza are seasoned veterans, and 15 year old Inglis jumped double-clear in the Nations Cup at Fontainebleau in April with her 11 year old Quick Star gelding, Nils d’Hurl Vent, while 16 year old Mendoza, who also took individual bronze last summer, was second in the Grand Prix at Moorsele (BEL) with the 14 year old Tixylix who has enjoyed something of a stellar career. Millie Allen won the first British trial with the 9 year old bay mare Song Girl. The French venue was a familiar one for this partnership who won the Grand Prix there in the spring and who were second in the Grand Prix, and on the winning Nations Cup team, at Hagen (GER) last month. The British squad was rounded up by 15 year old Alex Chitty and the 10 year old mare Amilie JR Z.

They arrived in Fontainebleau with all the necessary preparation, and were the only country to complete the first round of the Nations Cup on a zero score. Sweden and Germany lay second at the halfway stage carrying four faults each, while Denmark was next in line with eight followed by The Netherlands with 10. There were only two double-clear performances in the entire competition – and 14 year old Allen and Song Girl produced one of them which ensured the eight-fault second-round result for Chitty could be dropped, leaving them on a final tally of eight when Inglis and Mendoza both had one fence down second time out.

Germany and Sweden both suffered eliminations in round two, but while that put paid to Sweden’s chance, the Germans found themselves in a three–way third-round jump-off for bronze, helped greatly by the double-clear achieved by pathfinders Marie Schulze Topphof and Mentos Junior. The eight from Justine Tebbel (Patty), and four from Lars Volmer (Carrick) brought their tally to 16 after two rounds, and this left them on level-pegging with the Swiss who added nothing to the faults they collected first time out while Denmark joined them in the race against the clock having racked up an even eight faults in each of the first two rounds. But Danish hopes were dashed when their first two riders were eliminated in the jump-off, so when the Germans kept a clean sheet they stole silver ahead of the Swiss who picked up four more faults for bronze.

A total of 11 countries lined out in the Jumping Nations Cup and they finished in the following order – Great Britain, Germany, Switzerland, Denmark, The Netherlands, Belgium, France, Sweden, Ireland, Finland and Italy.

It was Switzerland’s Emilie Paillot and Top Jezabel de L’Etape who won the Individual Final competition ahead of Britain’s Chitty in second and The Netherland’s Lisa Nooren and Rock Dee Jay in third. But the four faults collected by fourth-placed Allen were the first she had picked up throughout the tournament, and the leaderboard showed her as clear winner of the 2012 Individual title, ahead of Nooren in silver carrying 7 faults. There was a jump-off between Paillot and Chitty for the bronze. And despite her faster time, the French girl lost out on the medal podium with a fence down.

There were big celebrations in the Irish camp after they took the Eventing team title for the very first time. And the addition of individual gold and bronze really put the icing on the cake. They established a narrow 1.3 penalty lead over the British in dressage and never looked back. They were the only one of the nine competing nations to produce three clears on cross-country day and went into the final afternoon with an advantage of almost 20 penalties.

Pathfinder Cathal Daniels was faultless throughout to finish on his dressage mark of 45.2 with Master Murrose, and that would prove the individual gold medal winning score. Ana O’Brien riding Ice Cool Bailey, and Lucy Latta with Nono – both team silver medallists in 2011 – added eight faults apiece over the coloured poles while Gavin Smiddy provided the discard score when adding 12 more to the penalties accumulated for two stops on cross-country day with Mr Hale Bob.

The British produced two clean sheets on the final day, but the withdrawal of Charlotte Bacon’s Three Wells Breeze – team bronze and individual silver medallists in 2011 – meant that Madeleine Taylor’s 76.0 point score with Bandalera had to be taken into account, and in the final analysis the Irish completed with a handsome winning margin of 25.9 over their British counterparts while The Netherlands took bronze despite the elimination of Levi Driessen and Knockout.

O’Brien’s good dressage mark ensured individual bronze despite her double-error on the final day with the 16 year old grey pony who has been a prolific winner throughout his career during which he also won a European Pony medal for her brother, Joseph, who works closely with their father – the world-famous race-horse trainer Aidan O’Brien. Britain’s Louisa Nesbitt was rewarded for a truly solid performance with Carrowmore Gemstone – one of just four from the starting field of 52 riders to finish on their dressage mark – when taking silver.

Irish Chef d’Equipe, Sue Shortt, said “”I knew in the last few weeks that we had the best team Ireland had ever fielded at the European championships, and their performance was fantastic. I’m delighted for the kids, they deserved everything they won today. This is the first time an Irish team has ever led the field after dressage and we owe that to our dressage coach Sue Smallman who turned the riders inside out in the months leading up to this”.