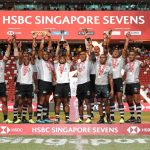 The result sees Fiji take the lead in the World Series standings after they knocked out South Africa in the Cup semi-final. Fiji are now four points ahead of the Blitzboks, who finished in fourth place, with two tournaments remaining.

Australia’s runners-up position moves them up into fourth overall and New Zealand remain in third.

The drama-filled final was an exhilarating display of end-to-end action. Going into the last minute of the game Australia’s John Porch showed his athletic finishing skills to dot down in the corner and with the conversion brought Australia ahead, for the first time in the game, by one point.

Australia still had time for the restart and a knock-on gave Fiji possession back. Gareth Baber’s team kept their cool and a 90-metre tournament-winning try, finished by Alosio Sovita Naduva, sealed an incredible 28-22 victory.

Captain Jerry Tuwai said “I’m speechless. Australia are a very good side and took us to the wire. We gave everything for this final.

“Winning this tournament will boost our morale going to London and Paris.

Earlier in the day England beat South Africa 26-24 to secure the bronze medal while New Zealand secured fifth with a 36-17 victory over Samoa. The Challenge Trophy winners were the USA after day two results against Argentina, Scotland and Canada in the final.

The next stop on the HSBC World Rugby Sevens Series is London 2-3 June. With only 37 points between the top four teams, this year’s series is proving to be the most competitive yet. —- WR