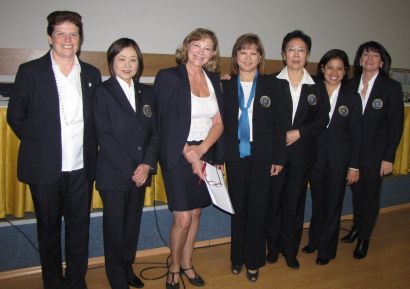 Lausanne, Dec 20: Bratislava, Following the men’s course at the beginning of the month, top Women’s Artistic Gymnastics judges from around the world convened in Bratislava (SVK) for their Intercontinental Judges’ Course for the 2013 – 2016 Cycle on December 14 – 18, 2012.

After courses for Trampoline in 2001, Aerobics in 2005, and Women’s Artistic and Trampoline in 2009, as well as the men’s course immediately before, it was the sixth FIG International Judges’ Course hosted by the Slovakian Gymnastics Federation. The federation graciously accepted to host this course after the Gymnastics Federation of Costa Rica had to withdraw from its organisation.

A total of 112 participants from 49 different federations representing all continents participated in the course, which is the only opportunity for judges to be certified at the highest FIG Brevet category of four, Category 1. The Category 1 judges will later serve on the D jury panel at the FIG World Championships and Olympic Games throughout the upcoming cycle.

Run under the direction of Nellie Kim (BLR), President of the FIG Women’s Technical Committee (WTC), and in a hospitable environment the course focused on the new 2013 – 2016 Code of Points that plays a determining part in shaping the development of the discipline over the upcoming four-year period.

The extremely well prepared judges were introduced to the new rules of the Code of Points that, among other things, represent more harmonious general regulations between Men’s and Women’s Artistic Gymnastics. Both practical and theoretical lessons were held, followed by a compulsory exam that must be passed in order to receive a FIG Brevet.

This Intercontinental Course was the final event to be led by the 2009-2012 FIG Women’s Technical Committee, marking the concluding function of the XIIth cycle of TC members before the Change of Powers Ceremony in February 2013. The make-up of the new WTC will be the same as before, with the exception of outgoing member Yan Ninan (CHN) who will be replaced by Zhou Qiurui, also of China. Yan Ninan gave an emotional speech in front of the course participants before standing down from the committee.

Following this Intercontinental Judges Course, a vast array of international judges’ courses organised by FIG member federations will be held over the coming months, with the first one in Reykjavic (ISL) on December 26 – 31, 2012. International judges’ courses are designed to give national Gymnastics federations the opportunity to train their judges on site in order for them to renew, confirm or improve their Brevet category. —- FIG