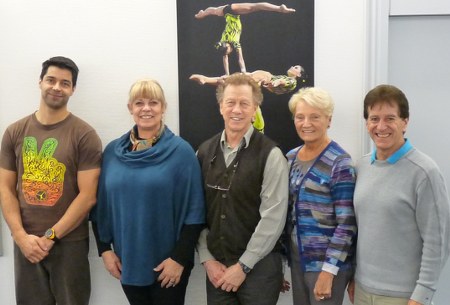 Lausanne, Feb 14, 2013: A two-week series of meetings held between January 29 and February 12, 2013, at the FIG Headquarters in Lausanne (SUI) reviewed all aspects of the FIG Academy and Age Group Programmes.

Each of the meetings was led by FIG 1st Vice President Slava Corn (CAN) who has the responsibility for the FIG Executive Committee to oversee the education programmes and by Hardy Fink, the Director of FIG Education and Academy Programmes. Also attended part-time was Olivia Bille Peña, the Manager of FIG Education Programmes. Meetings with the review groups for the individual disciplines were held for those disciplines which had changed sufficiently in technical or Code of Points requirements that these needed to be studied for implementation within the coach education programmes.

The first meeting was with Nicolas Buompane the FIG Deputy General Secretary and Olivia Bille-Peña and was intended to deal with all administrative financial aspects including a review of the academy policies and the age group programme as well as determining future directions which included the possibility of gradually expanding the Men’s and Women’s Artistic Gymnastics age group programme to other disciplines.

A meeting with the FIG Anti-doping & Medical Managers, Chantal Steiner and Loïc Vidmer reviewed the World Anti-Doping Agency (WADA) requirements and online offerings. It was confirmed that this mandatory WADA online education and examination tool would become an academy requirement for all coaches and would be introduced and explained during the opening session of each academy.

More details on both of these developments will be provided in coming weeks. The group also met with the FIG media and IT staff – Philippe Silacci (Media Operations Officer), Olivier Strebel (Marketing & Communications Director), and IT Managers Genghis Gossin and Pierre Droz – to discuss improvements in the way the coach education initiatives which include age group programmes, academies and Olympic Solidarity courses could be presented and accessed on the FIG website. In addition, Hardy Fink gave a two-hour presentation for all of FIG staff on the academy and age group programmes.

The review groups for the various disciplines were not the same as the Academy Working Groups that had initially developed the curriculum and resources, but they did include some of those persons and also other frequent academy experts as well as two Technical Committee Presidents. The first such review meeting was with Aerobic Gymnastics to which were invited Mireille Ganzin (FRA), the Aerobic Technical Committee President, John Atkinson (GBR), the former TC president, Valerie Grandjean (FRA), the French National High Performance Director and former National Coach and Keith Russell (CAN) the President of the FIG Scientific Commission.

That meeting was followed by a similar review meeting for Acrobatic Gymnastics to which were invited Rosy Taeymans (BEL), the newly elected TC president for that discipline, Laurenço França (POR), the Portugal National Coach and Keith Russell. Rui Vinagre who works as Sports Events Manager within the FIG Office for that discipline also attended part of the meeting.

Finally a meeting to review Rhythmic Gymnastics included Nadya Aleksandrova (GBR) the former National Coach of Bulgaria and Great Britain, Natalia Gorbulina (RUS) one of Russia’s national Coaches, Lasse Nettum a music and RG expert from Norway and Eunice Lebre, an RG expert who currently works in the FIG Sports Department. FIG President Bruno Grandi (ITA) visited that meeting to offer encouragement and direction for the ensuing work and thanked the participants for their efforts.

In between these meetings, the FIG Academy Programme managed to squeeze a four-day working meeting with Ivan Čuk of Slovenia and Hardy Fink to revise and update and/or produce the three levels of technical manuals for Men’s and Women’s Artistic Gymnastics. Keith Russell was able to stay for the first day of those workdays. All 18 manuals – two disciplines, three levels, three languages – will be ready by this summer for all future academies.

It was an incredibly busy and productive two weeks that left all participants with much work to complete in the coming months and which should improve all aspects of the FIG coach education offerings. Technical manuals will be updated, technical lectures and resources will be modified and improved and theory lectures will be revised where necessary. Revised academy policies will be available in full and also as a single-page easy to understand summary page. —- FIG