Home  »  OTHER SPORTS   »   Andreani and Sneekes win in Paris 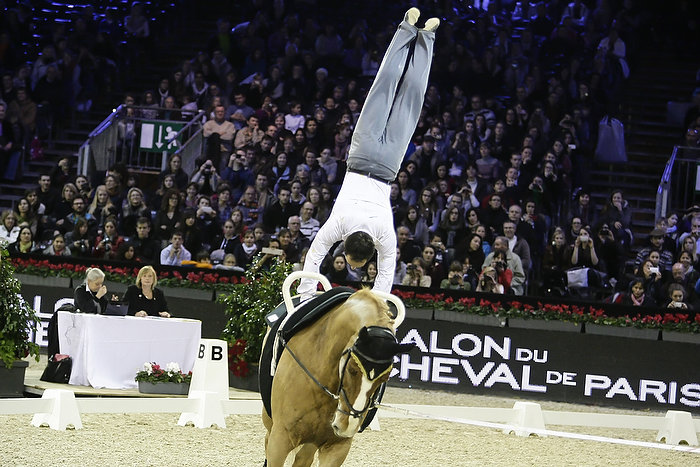 The 28-year-old winner of the FEI World Vaulting Championships 2012 in Le Mans (FRA) left the judges in no doubt about his world-class abilities. His performance in two outstanding freestyle-to-music rounds on the 15-year-old chestnut gelding Just A Kiss, lunged by Marina Joosten Dupon, gave him a final score of 9,271 points.

“I’m so happy to have made such a good start in the FEI World Cup Vaulting 2012/2013 series,” said Andreani. “I’m looking forward to replicating my performance at the leg in Leipzig next month, then again in Bordeaux in February and in the Final in Braunschweig.”

Andreani’s phenomenal routine put him 966 points ahead of his nearest rival and compatriot Ivan Nousse, bronze medallist at the FEI World Vaulting Championships 2012, whose smooth and expressive performance with Whisper, lunged by Elke Schelp-Lensing, earned a healthy 8,305 points.

Carola Sneekes, a 27-year-old medical student at the University of Amsterdam, secured the first Dutch win in the history of the FEI World Cup™ Vaulting series. Partnered with the 12-year-old Nolan, lunged by her mother Marjo Sneekes, she completed with 8,061 points.

“I have enjoyed every single second of the FEI World Cup Vaulting in Paris!” said Sneekes, who has competed internationally since 2009 and beat the favourite, 25-year-old Alicen Divita (USA).

Divita, who finished 11th at this year’s FEI World Vaulting Championships, had travelled all the way from California to compete in Paris. She earned 7,889 points on her brand new horse Pino del Rio, lunged and trained by Elke Schelp-Lensing.

“I felt great on Pino del Rio, which I have just bought,” said Divita. “Because I had school, I was only able to come over one day before the competition. I had one practice on him, and I felt like I started right where we left off in Le Mans. I am really excited about him and finally having a horse of my own for international competitions.”

“The competition itself was really fun,” she continued. “The people were so friendly, many spectators came up to tell me how much they enjoyed watching my routines, and they were so welcoming.”

Her goal is now to come back to Germany and have some time to train on Paul, as Pino del Rio is known at home, so that she can earn enough points to qualify for the Final in Braunschweig.