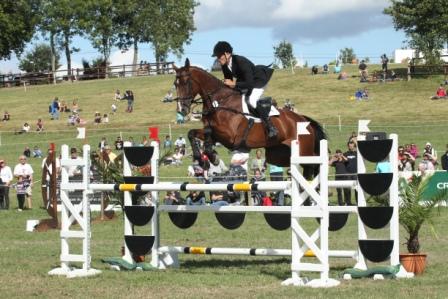 Lausanne (SUI), August 27, 2012: Switzerland’s Felix Vogg has won the FEI World Cup™ Eventing 2012 title. The 22-year-old finished the World Cup season on 86 points, level with Belgium’s Karin Donckers, but under the series rules, in the event of equality, the rider with the highest placing is declared the winner and Vogg’s second place finish in Strzegom (POL) has secured him the title and the winner’s cheque of €9,000.

Felix Vogg competed at three World Cup fixtures during the 2012 series – Strzegom, Malmö (SWE), where he finished seventh and 11th, and Haras du Pin (FRA), where he finished 12th. With only the three best performances counting, Vogg’s 38 points from Strzegom and 48 (28/20) from his two Malmö placings bettered the 18 earned in Haras du Pin and the points from the French fixture were dropped from his tally, leaving him on 86.

Karin Donckers also ended the FEI World Cup™ Eventing season on 86 points, after finishing third, eighth and ninth in Haras du Pin, to leave her second overall in the series.

Felix Vogg was born in Waiblingen (GER) into a family steeped in horse sports, and his maternal grandfather Roland Perret represented Switzerland at the 1956 Olympic Games in Stockholm (SWE). The Vogg family moved to their current home, Radolfzell, close to the Swiss border, in 2003.

Between 2008 and 2011, Felix Vogg was based in Warendorf (GER), where he completed the professional riders apprenticeship, the Pferdewirt Schwerpunkt Reiten, at the end of which he won the prestigious Stensbeck Award. He now trains full time in Germany with Olympic, world and European Champion Michael Jung.