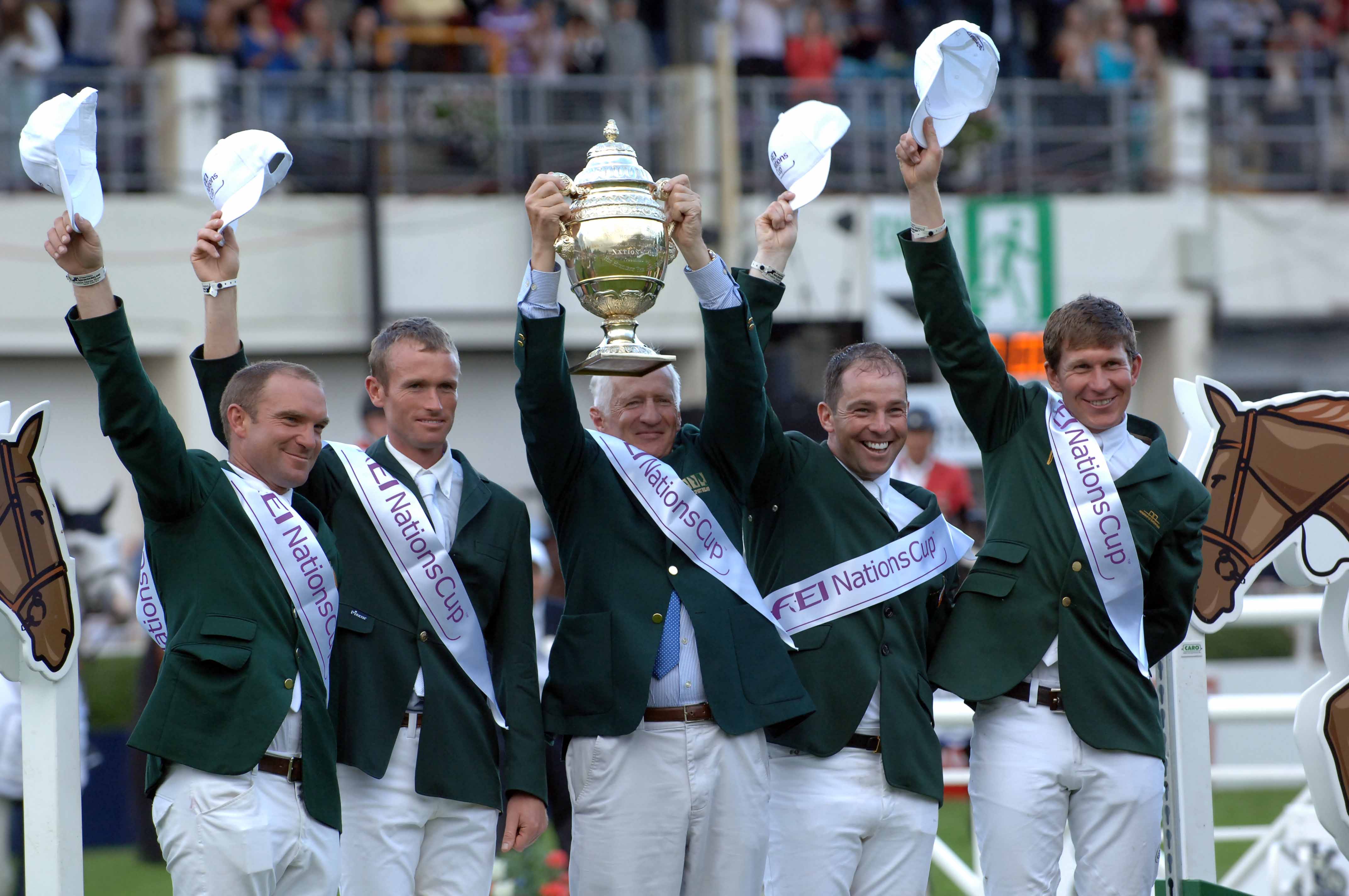 Dublin (IRL), 17 August 2012: Germany claimed the FEI Nations Cup™ title for the second successive year, and the fifth time in the 10-year history of the top-league series, as the season came to a close at Dublin Horse Show (IRL) on Friday.The Irish recorded a back-to-back double when winning the last leg of the FEI Nations Cup™ 2012 on home turf in Dublin, Ireland today. The result rocketed them up the leaderboard to third place behind France in the final standings, but, despite a disappointing day when finishing an uncharacteristic last, it was Germany that claimed the series title for the fifth time in the 10-year history of the top-level league.

A 29-fault total put paid to German chances this afternoon, but, as Chef d’Equipe Sonke Sonksen said afterwards, “we are still walking away with a big cheque!” having collected the winner’s prize of €100,000. “We’ve had a fantastic season right up until Hickstead, and then the Irish showed us that they are getting stronger and stronger. This is one of the best teams they’ve ever had” he pointed out. And there was certainly excitement in the Irish camp as the comparatively young foursome of Clem McMahon, Richie Moloney, Darragh Kerins and Cian O’Connor secured the win with considerable comfort, anchorman O’Connor not jumping in the second round as the destination of the coveted Aga Khan trophy was already decided.

France finished second ahead of Great Britain in third, while The Netherlands slotted into fourth ahead of Belgium and Switzerland in equal-fifth place. Sweden finished seventh when their 28-fault score left them just ahead of Germany in eighth and last place.

The host nation already had the whip hand at the halfway stage when carrying just a single time penalty. Alan Wade’s 12-fence track was straight-forward but strong, the open water at fence four claiming a number of victims and the triple combination at fence eight doing likewise. But the penultimate vertical with a simple water tray below it was the real bogey of the day, with 15 horses lowering it in the first round. The distance to the following wide oxer proved difficult to get for many, and the only fence to fall for the Irish in the first round was this one, as anchorman Cian O’Connor left it on the floor.

The Germans were already lying last, with 17 faults on the board, as the second round began despite a lovely opening clear from Carsten-Otto Nagel and Corradina. Belgium carried 16, and the Dutch and Swiss carried 12. Surprisingly, Switzerland’s new individual Olympic champion, Steve Guerdat, produced his team’s drop-score in both rounds with the 11 year old Carpalo. And there was a surprise on the British front too when pathfinder Nick Skelton, fresh from his team gold medal winning performance in London, collected 16 first-round faults with Carlo, the horse which he clinched victory in Dublin last year. However the British, who were on a mission to avenge defeat by the Irish in the penulltimate leg of the series on their home ground in Hickstead last month, were still threatening strongly when heading into round two with just the five faults picked up by Robert Smith and Voila after both Tina Fletcher (Hello Sailor) and John Whitaker (Argento) left all the poles in place.

Closest to the leading Irish were France and Sweden carrying just four faults each, but while the former held fast to finish in runner-up spot, a disastrous 24-fault second effort saw the latter crash out of contention.

The Dutch rallied strongly when adding just four faults in round two, but the Germans and Swiss were hampered when having to add 12 more to their tallies while the Belgians wouldn’t feature strongly either when putting eight more on the board. Skelton returned a lovely clear second time out, while Fletcher produced another flawless performance from her 13 year old gelding, but when Whitaker retired after two fences down, the British were obliged to add another five picked up by Smith to finish on a total of 10 at the end of the day.

And the French second-round effort started badly when Penelope Leprevost’s Topinambour, stopped at the wooden wall at fence seven which he had jumped without question first time out. When the stallion showed no enthusiasm for the following triple combination either, their day came to an end. The second part of a double-clear from Roger Yves Bost and Nippon d’Elle steadied the French decline and when Jerome Hurel (OHM De Ponthual) was fault-free at his second attempt the pressure was still on the Irish with one rider still to go, although the Swedes had disappeared from the reckoning when, despite a second great clear from pathfinders Jens Fredricson and Lunatic, they had to add 24 without taking into account the 20 racked up by Lisen Fredricson and Matrix.

Irish pathfinder, Clem McMahon, posted a second lovely clear from his exciting eight year old stallion Pacino, and second-line rider Richie Moloney followed suit with Ahorn van de Zuuthoeve with which he had picked up just the single time penalty first time out. Darragh Kerins and Lisona made it all the way to the final oxer before putting that on the floor, but now only a clear round from French anchorman, Kevin Staut, could pressurise the Irish. If he kept a clean sheet then any mistake from Ireland’s last man, Cian O’Connor, would provide a French victory, but it wasn’t to be, Reveur de Hurtebise HDC clipping the front element of the double at fence five to bring the the French tally to eight faults while the Irish would finish with five without the services of their London Olympic Games individual bronze medallist.

Irish Chef d’Equipe, Robert Splaine said “I’m over the moon! I wasn’t over-confident at the halfway stage because I’ve been around this game too long. I knew we were in a good position but we had to keep our heads down and keep going, but what a result! A fabulous double-clear from Clem, Richie with just one time fault, Darragh was brilliant, just unlucky at that last fence, and Cian would have gone clear in the second round if we needed him – it’s incredible to come from where we were (in second-last place) to where we are now (in third place on the final league standings). A lot of people came here for a great show, and we gave them something to cheer about!.” he said.

“This is a day you dream about” said McMahon. “I first competed here at Dublin Horse Show in 1986 in a 128cms competition and I always dreamed that some day I’d be on a winning team here – it’s the greatest feeling” he pointed out. His horse, Pacino, has always been a real eye-catcher and attracted a lot of attention when appearing in his first top-level FEI Nations Cup in Rotterdam earlier this summer. “He’s an exceptional horse” he said of the eight year old stallion which is owned by his mother, Maureen McMahon. “I got him when he was just coming three years old, and he never jumped here in Dublin before. I jumped him in one round on Wednesday and to jump two rounds clear in the nations cup today with him is amazing”.

Darragh Kerins was riding the only Irish-bred horse on the winning team, the 11 year old mare Lisona which was bred by former Irish army rider and Hickstead Derby specialist John Ledingham. From Collooney in County Sligo in the west of Ireland, Kerins emigrated to the USA 20 years ago to carve out a successful jumping career. Winning on his home turf today was a special moment. “If I was to retire today I would have done everything I wanted to do in my whole life!” he insisted.

O”Connor said he would have liked to come back to jump his second round. “I should have jumped clear in the first round but it was a great day. We did the job and delivered in front of the home crowd” he pointed out. Richie Moloney, who hails from Kilkenny but is also based in the US, said “I couldn’t have hoped for anything better”.

Nations Cup jumping is set for changes in the 2013 season and a draft copy of new ideas is in circulation right now. The last leg of the FEI Nations Cup™ 2012 series today may mark an end to one era in the history of team jumping, but this sport which has survived, and thrived, for more than 100 years showed once again today why it is much-love world wide. As FEI Jumping Director, John Roche, said “what we saw today was the best of good sport, and the crowd loved it!”

This was a back-to-back series victory for Germany.

Germany has now recorded the most victories in the ten-year history of the top-league FEI Nations Cup™ series with five in total.

This was the first Irish Nations Cup win on home soil since 2004.

There were four double-clear rounds – from Ireland’s Clem McMahon and Pacino, Roger-Yves Bost and Nippon d’Elle for France, Jens Fredricson and Lunatic for Sweden and Britain’s Tina Fletcher with Hello Sailor.

The youngest horse in the competition was the 8 year old Pacino ridden by Ireland’s Clem McMahon.

The oldest horse was the 16 year old stallion Sterrhof’s Opium ridden by The Netherlands’ Marc Houtzager. 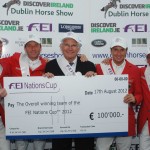 Germany claimed the FEI Nations Cup™ title for the second successive year, and the fifth time in the 10-year history of the top-league series, as the season came to a close at Dublin Horse Show (IRL) on Friday. —- By Louise Parkes, FEI/ Photo: FEI/Tony Parkes