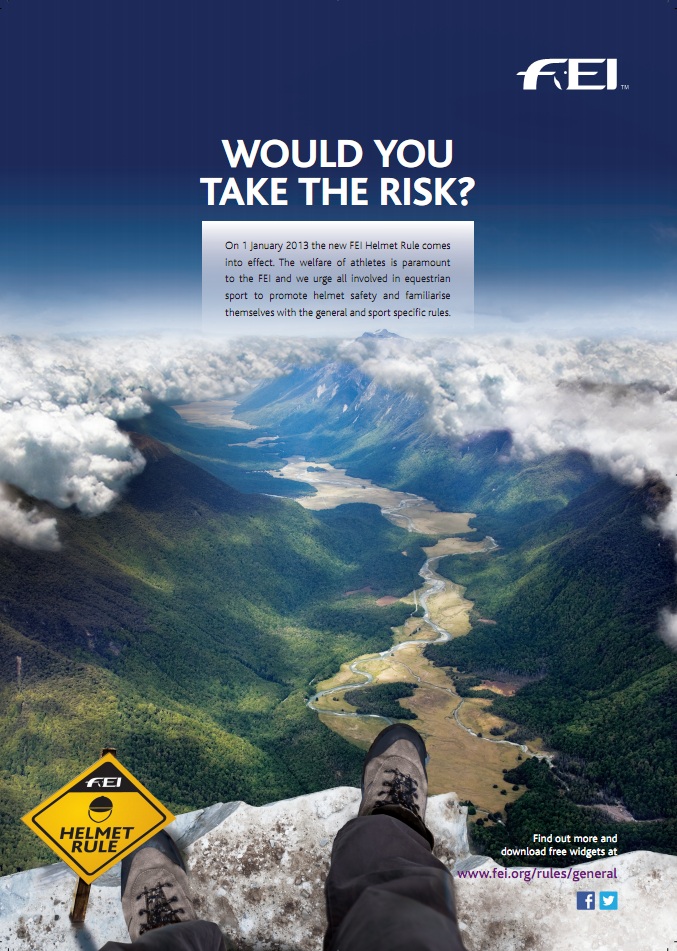 Lausanne, Dec 18: HELMET, The FEI has launched a global campaign to promote the use of protective headgear. The move comes two weeks before implementation of a new rule making the use of a properly fastened protective headgear mandatory while riding on the show grounds at FEI events. The campaign, which will be conducted mainly online, begins today, a fortnight before the new rule comes into effect on 1 January 2013.

An important part of the campaign will be a series of emails with strong visuals reminding athletes of the importance of safety, and particularly of helmet use. These reminders will be sent to the National Federations, athletes and officials clubs, and various FEI stakeholders on a regular basis throughout 2013. A special page outlining the protective headgear requirements specific to each of the seven FEI disciplines on the field of play and outside the competition arena has been created on the FEI website and can be accessed.

“The helmet rule, which was unanimously adopted by the FEI General Assembly in 2011, is a significant step forward towards the better protection of our athletes,” said FEI Secretary General Ingmar De Vos. “Beginning 1 January 2013, protective headgear will be compulsory at all FEI events and we strongly encourage everyone involved in international equestrian sport to familiarize themselves with the new general and sport-specific rules. The welfare of all our athletes, human and equine, must be protected.”

Helmet use has been at the forefront of several campaigns in recent years. US Dressage rider Courtney King-Dye, recent winner of the FEI Against All Odds Award, advocates educating equestrians on the benefits of wearing helmets through the Riders4Helmets campaign (www.riders4helmets.com). In 2010, King-Dye, who had represented the United States at the Beijing 2008 Olympic Games and at the FEI World Cup™ Dressage Finals 2007 and 2008, suffered a traumatic brain injury. A horse she was schooling tripped and fell and, with no helmet to protect her, she fractured her skull in the fall. After four weeks in a coma, she spent three months in hospital re-learning how to walk and talk. The after-effects of the accident still severely affect her coordination and speech. She is now aiming to compete at the 2016 Paralympic Games in Rio de Janeiro (BRA).

“I think my accident was necessary in the fight for safety because an Olympian who sustains a brain injury while riding proves that injury has nothing to do with level of skill,” Courtney King-Dye commented. “For 15 years, I was a person who only rode the young or ‘dangerous’ horses with a helmet, but my horse did nothing naughty, he just tripped over his own feet.

The Yellow Warning Card system already in place will be used for those athletes who do not comply with the new rule. A Yellow Warning Card will be given if an athlete is reminded that he or she needs to wear protective headgear and the athlete fails or refuses to comply after such reminder. —- FEI