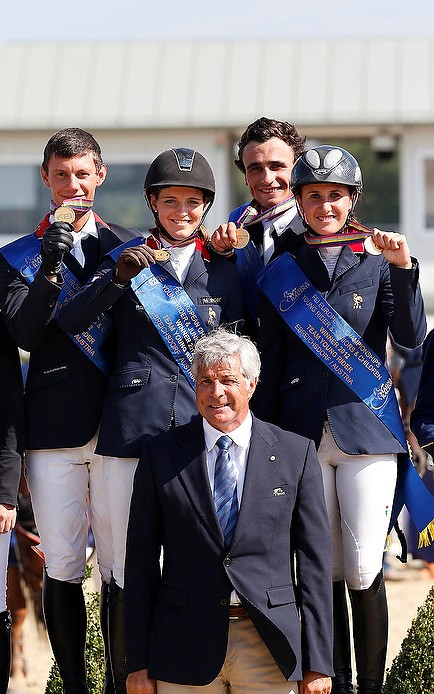 Ebreichsdorf – Austria, August 21, 2012: The incredible setting of the Magna Racino venue at Ebreichsdorf (AUT) played host to the 2012 European Championships for Young Riders, Juniors and Children, with over 200 horses and riders descending on the site which many believed provided the best facilities ever for these prestigious Championships.

The Young Rider Championship attracted a strong field of athletes, many of whom already compete regularly on the senior international circuit. The battle for the team medals was intense and just a single time fault divided the French and Swiss in the tussle for gold. Despite posting two double clears, the Swiss tally of 10 faults was just not enough and they were held down in the silver medal position by their European neighbours France, who finished on the winning total of nine faults.

The battle for the bronze was just as close and once again the final positions were separated by just one point. Going into the second round Sweden carried just eight penalties, well ahead of Germany on 17. The Germans put in a flawless performance in the second round for an overall total of 17, and were looking good for a move up onto the podium when the second of the Swedes picked up 16 faults. But Sweden managed to hang onto bronze with a clear and two four-faulters, leaving the Germans out of the medals.

The fight for individual glory was also tough when the three main contenders had a strong lead going into the third and final qualifier. Just 0.6 penalties separated Championship debutant Maelle Martin (FRA) and Championship regular Martin Fuchs (SUI), with Petronella Andersson (SWE) seven faults further behind. But experience prevailed when Fuchs picked up just one time fault across both rounds to claim individual gold with his long time partner, the 16-year-old grey gelding Principal 12. Fuchs, who has previously won both silver and bronze at these Championships, now has a full set of championship medals to add to his team gold from the Youth Olympic Games in 2010.

Maelle Martin picked up an unfortunate four in each round, but a stunning double clear from Petronella Andersson meant the Swede pipped her French rival to the silver by just 0.13.

It seems Ireland can do no wrong at the moment, and their winning streak continued with team gold in the Junior event. Following Cian O’Connor’s Olympic bronze medal, the senior Irish team won the prestigious Aga Khan trophy at the Dublin CSIO5* last Friday, just 24 hours after the Junior team had swept to victory at Ebreichsdorf, finishing eight penalties ahead of Belgium and Great Britain to claim gold.

A jump-off was required to separate Belgium and Great Britain, who were tied on 12 faults after the two rounds. In the end however, it was the Belgians that kept cool heads to comfortably clinch silver with just five penalties in the jump-off, well ahead of Great Britain’s total of 34. The Belgian silver was one step up from their bronze medal performance in 2010 and Great Britain were thrilled with their bronze medal, having missed out on podium positions since 2008.

The individual medals came down to just time faults when the top three combinations jumped all three qualifiers without knocking a single fence. German athlete Maurice Tebbel came out on top with five clear rounds on his mount Cooper 75. This talented bay gelding usually competes with Tebbel’s father, Rene, but the junior rider got great form out of the nine-year-old when finishing the Championships on a totally clean sheet. Camille Delaveau (FRA) and Abigail Newbery (GBR) were on level pegging ahead of the second round of the final qualifier with a single time fault apiece. A foot-perfect clear in the final round clinched the silver for Delaveau, while one time fault meant bronze for Newbery.

Belgium took their second team medal during the Children’s Championship, but this time they occupied the top step of the podium, claiming gold ahead of host nation Austria, with France taking the bronze. No fewer than 10 teams started the second round on zero. Belgium held their nerve and came home with just four faults from the second round and were deserving winners of the title. The Austrians also remained calm under pressure to finish on eight faults for the silver, while France and Germany both clocked up 12 penalties to force a jump-off for the bronze. With three clears against the clock, France proved too strong and pushed Germany off the podium when they added a further 12 penalties for overall fourth.

A thrilling three-way jump-off was required to separate the top three for the individual medals. It seemed Belgium would make it a double coming into the final round with two of their riders on zero penalties. A fence down and a time penalty put Gilles Thomas (BEL) out of the reckoning, but Louise Van Laer’s (BEL) four-fault round put her on an even keel with Virag Weinhardt (HUN) and Gianluca Mario Pirovano (ITA), who both carried forward four faults from the second qualifier but produced clear rounds in the final round. Against the clock, Gianluca Mario Pirovano’s single knockdown was enough to clinch gold ahead of Virag Weinhardt (HUN) on eight faults and Louise Van Laer (BEL) on 12. —- FEI By Anna Williams/Photo: FEI/Tomas Holcbecher

View all posts by: Abdul Rahim
2 Responses to “European Championships for Young Riders”