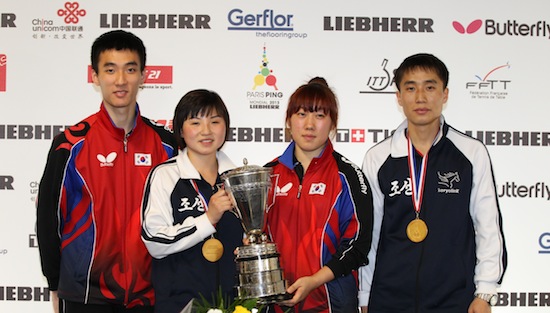 Paris – France, May 18, 2013: DPR Korea has broken China’s 19-year stranglehold on the mixed doubles title at the World Championships, by beating the Korean Republic in a historic match during the LIEBHERR 2013 World Table Tennis Championships.

DPR Korea started the match strongly and raced to a 3-0 lead. The nerves then kicked in and they lost the next two games to the very determined Korean Republic pair. To their relief, they managed to get that crucial fourth game, to secure the 65 year old Heydusek Cup for DPR Korea for the very first time.

The significance of the victory was portrayed when the DPR Korea national anthem started and KIM Jong burst into tears, which touched the hearts of the 12,000 fans at Palais Omnisports de Paris-Bercy .

KIM Jong stated during the press conference: “These were tears of pleasure as we were able to live up to everyone’s expectations.”

Her doubles partner KIM Hyok Bong, who was equally emotional, added: “This is a great surprise; we have always dreamed about this, and are so glad it is now a reality.”

Both countries may have their differences off the table tennis table, but these two pairs showed the power of sport to break barriers and form friendships.

“We came here as table tennis players we don’t know anything about the politics. We were happy to be able to play against our North Korean brothers. Congratulations to them for winning gold”, stated the Vice President of the Korea Table Tennis Association PARK Docheon.

The ITTF will find out in 2 weeks whether or not the IOC accepts the application to have the mixed doubles event added to the table tennis Olympic program in Rio 2016. The success of the mixed doubles at the 5th World Championships event will only strengthen the bid to get the exciting event played in Rio. —- Photo by An Sungho/ITTF