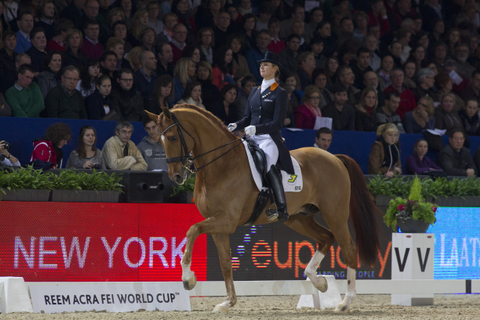 By Louise Parkes, Lausanne, April 12, 2012: Adelinde Cornelissen will be hoping to reclaim the Reem Acra FEI World Cup™ Dressage series title on home turf in ‘s-Hertogenbosch, The Netherlands next week. This Dutch city, which played host to the very first FEI World Cup™ Dressage Final back in 1986, will welcome 18 competitors from 11 nations to the 2011/2012 finale which begins on Tuesday 18 April (DEN BOSCH).

Historically, riders from The Netherlands have dominated this series, with 11 wins from 26 seasons, and Cornelissen is, undoubtedly, the one they all have to beat this time around. She has been all but untouchable since scooping the Reem Acra title in Leipzig (GER) 12 months ago, going on to claim Grand Prix Special and Freestyle gold, along with team bronze, at the FEI European Dressage Championships in Rotterdam (NED), last August. And her equine partner, the big, bold chestnut Jerich Parzival, showed he has lost none of his edge when sweeping to victory on both of their appearances on the Reem Acra Western European League circuit over the winter months, swamping the opposition with strong scores at both Mechelen (BEL) in December and again in Amsterdam (NED) in January.

If Cornelissen succeeds in making it a back-to-back double of series victories with the same horse, then she will become the fifth rider to do so. Switzerland’s Christine Stuckelberger and Gaugin de Lully were first to achieve this distinction in 1987 and 1988, and Germany’s Monica Theodorescu and Ganimedes followed suit in 1993 and 1994.

Cornelissen’s fellow-countrywoman, Anky van Grunsven then got into her stride with a double in 1995 and 1996 before setting a new record for three consecutive wins when repeating their supremacy in 1997. Germany’s Ulla Salzgeber and the much-loved Rusty claimed the honours in both 2001 and 2002, but Van Grunsven’s success rate in this series, and throughout her spectacular career, has left her in a league of her own.

She came back to do another double with Bonfire in 1999 and 2000 and the first two parts of yet another treble with Salinero in 2004, 2005 and 2006. It will be a long time before any other rider will have such a huge impact on the sport, but Cornelissen will be attempting to secure her place in the pages of the Dressage history-books when Parzival steps into the ‘s-Hertogenbosch arena next week.

The sport of Dressage and the venue at ‘s-Hertogenbosch have a long and distinguished connection. This will be the ninth FEI World Cup™ Dressage final to take place at the Brabanthalle, and Gerrit Jan Swinkels, President of Indoor Brabant, has no shortage of experience when putting together a world-class fixture. He has been on the Organising Committee for 36 years and is now preparing for the 45th show. This man with a winning formula, who turns 65 later this year, says he will retire after the 50th show, so he still has some way to go yet.

And he has another important claim to fame, as he was the first person to introduce Anky van Grunsven to horses. She would go on to become one of the greatest influences in the sport of Dressage in subsequent years, so there is a very close link between top-class Dressage and the organisation of the sport which is enjoying greater popularity than ever in recent years.

Cornelissen of course must see off the best efforts of some formidable opposition in her quest for double-glory. The Western European League contingent includes Sweden’s Patrick Kittel, who won twice with Toy Story on home territory this season – first at Stockholm in November and again at the final qualifier at Gothenburg in February. He only just pipped fellow-Swede Tinne Vilhelmson-Silfven, riding Don Auriello, in Stockholm, and Vilhelmson-Silfven will join him in taking on Germany’s Helen Langehanenberg (Damon Hill/Responsible), double FEI World Cup™ Dressage champion Isabell Werth (Der Stern/Don Johnson/El Santo NRW) and Nadine Capellmann (Girasol 7/Elvis VA).

Cornelissen’s compatriot and fellow European bronze medallist, Hans-Peter Minderhoud, made his mark with IPS Tango at the opening leg in Odense (DEN) last October while Italy’s Valentina Truppa headed the line-up at Frankfurt (GER) in December with Eremo del Castegno and will be at next week’s Final. The veteran Richard Davison is the sole British contender with Hiscox Artemis, while Lone Jorgensen’s increasingly impressive results with FBW De Vito have earned a place for this experienced Danish rider.

The Netherlands will also have a third representative in Jenny Schreven, and Krawall, while Mikaela Lindh flies the Finnish flag with Skovlunds Mas Guapo and Siril Helljesen and Dorina will put their best feet forward for Norway.

Central Europe will be represented by two polished Polish performers, Katarzyna Milczarek with Ekwador and Michal Rapcewicz with Randon, while there will be a real buzz around the Australian partnership of Rachael Sanna and Jaybee Alabaster who have travelled all the way from the other side of the globe to take their place on behalf of the Pacific League after winning the Asia/Pacific FEI World Cup™ Dressage series.

American riders have only won the FEI World Cup™ Dressage title twice – Debbie McDonald and the great mare, Brentina, claiming the honours at Gothenburg (SWE) in 2003 and Steffen Peters nearly lifting the roof off the Thomas and Mack Arena in Las Vegas (USA) in 2009 when pinning Isabell Werth and Satchmo into second spot with a fabulous performance from Ravel.

Jan Ebeling, riding Rafalca, and Shawna Harding with Come On III are the US representatives this time around, and they will be intending to make their presence felt after the long trip across the Atlantic Ocean. But it seems that everyone else will have to raise their game to some considerable extent to stop defending champions, Adelinde Cornelissen and Jerich Parzival, from enjoying yet another victory gallop to celebrate winning the 2011/2012 Reem Acra FEI World Cup™ Dressage trophy. Photo: FEI/Karl-Heinz Freiler