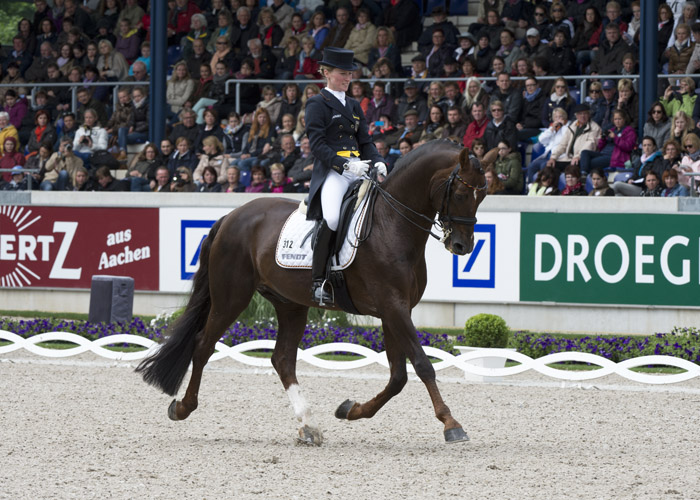 By Louise Parkes, Aachen – Germany, June 27, 2013: The German team secured a crisp, clean victory in the third leg of the FEI Nations Cup™ Dressage 2013 series on home soil at Aachen today. The powerful side were favourites from the outset and lived up to expectations when topping the winner’s podium by a margin of more than seven percentage points over Denmark, while the USA finished third. A total of nine countries were represented at this penultimate leg of the pilot series, which will come to a conclusion at Hickstead, Great Britain in early August.

Reigning Reem Acra FEI World Cup™ Dressage champion, Helen Langehanenberg, headed the individual rankings and left the team result in little doubt with yet another lovely performance from the stallion Damon Hill NRW as the competition was drawing to a close. The runners-up from Denmark were well-pleased however. As hosts of the Ecco FEI European Championships in Herning in eight weeks time they came to Aachen with the intention of making the best possible impression and they succeeded, with Nathalie zu Sayn-Wittgenstein and Digby bolstering their position when slotting into third place ahead of team-mate Anna Kasprzak and Donnperignon in fourth.

However it was Anabel Balkenhol’s solid ride with Dablino FRH, 13th of the 37 starting combinations to enter the arena, that set Germany on the road to success. Posting a score of 77.043 with her 13-year old-gelding, she provided her side with a solid platform and when Isabell Werth steered Don Johnson FRH to a mark of 73.979 and then Langehanenberg produced the only score over 80 percent – 81.128 – that clinched it. Fabienne Lutkemeier’s 71.830 with D’Agostino was the discard score, as the best three scores counted, but German Chef d’Equipe, Monica Theodorescu, said afterwards: “Fabienne is not happy because she made a few mistakes, but she deserved to be on the team and I’m proud of her!”

The American effort was strengthened by a fifth-place finish for Steffen Peters and the 11-year-old Legolas. The rider, who is based in Del Mar, California, has had Aachen in his sights all season, bringing the horse to Hagen (GER) in April and then flying them both back to the US before crossing the Atlantic again for this latest event in their calendar. He is enthusiastic about the concept of FEI Nations Cup™ Dressage, and Legolas, who has been partnered with Peters for last 18 months, continues to demonstrate an impressive level of improvement every time out, today scoring 75.298 percent.

Sweden finished fourth with The Netherlands in fifth and Belgium in sixth place. Both Spain and Finland fielded just three riders, finishing seventh and ninth respectively. The British, winners at the second leg of the series in Rotterdam (NED) last week, only managed eighth place on this occasion.

The German win was not without its moments of drama. While Lutkemeier set the stage and Balkenhol followed with a score that would take quite some beating, it wasn’t all plain sailing for the multi-medalled Werth, who had what Chef d’Equipe Theodorescu described as “a little time error in the warm-up”. Werth admitted afterwards that she didn’t keep an eye on her watch – “I thought there were three riders before me but I had 10 minutes too much, I was ready 10 minutes too early and he (Don Johnson FRH) was a bit over the point!”

Theodorescu could see the funny side of it. “Things happen, especially to riders who don’t do many shows and don’t have much experience! I know for the future better will happen and she made a lovely ride and the best of the situation – it happened….” the team manager said with a twinkle in her eye.

Theodorescu continued: “It is a new situation for me to have the honour to be part of this team. Helen and Damon Hill were prepared really well, they were very precise, very elastic and on the point. The horse was fit and supple and harmonious.” She said Werth “had a very good ride with no mistake and showed all her skills”, and when asked what was the biggest surprise of her day she replied, “well it wasn’t really a big surprise but it was Annabel getting to show what is in her horse, I’m very happy for her” she said. Theodorescu will name her team for the European Championships on Sunday.

Danish coach, Rudolf Zielinger, was well-pleased with the result achieved by his pathfinder Lone Bang Larsen with Fitou L. “Lone had a great start in Stadl Paura and Hagen….the whole combination looks very secure. They can handle the pressure, their highlights are the piaffe and passage and they have three good basic gaits. Lone was brave today, going in first and on her first time in Aachen.”

Looking forward to the forthcoming European Championships. he continued, “I’ll be happy if we are second or third in Herning. We will have a strong team and will be going for a medal in the team but there is England, Holland and Germany who are very strong. Anna took really high risk today and there is a little chance to go higher. Lone, our first rider, was a little nervous and could have been more powerful, but I believe we can be very competitive for the Europeans.”

However it was Germany’s Langehanenberg who stole the limelight yet again, consistently scoring over 80 percent throughout her test and finishing with the squarest of square halts. As she leaned forward to give her stallion a big hug he shook his head as if to say “yes, that was pretty good alright!”, and there is no doubt that this pair are the ones to beat on the circuit right now.

Talking about Damon Hill NRW Langehanenberg said: “he will have a break after Aachen. The time between the German Dressage Championships (at Balve three weeks ago) was quite short. When he has a break he goes jogging but doesn’t have any dressage training. Hopefully we can look forward to Herning, but first he will get a rest now. I had a great feeling today, he felt fresh and willing to go in and was moving forward, it was a pleasure to ride him and I had fun – and I think he did too!”

As the FEI Nations Cup™ Dressage pilot series moves towards its conclusion at Hickstead on 4 August the Dutch hold the lead. But they have only a two-point advantage over Sweden at the top of the leaderboard, while Germany lies third after today’s victory, another eight points further adrift.