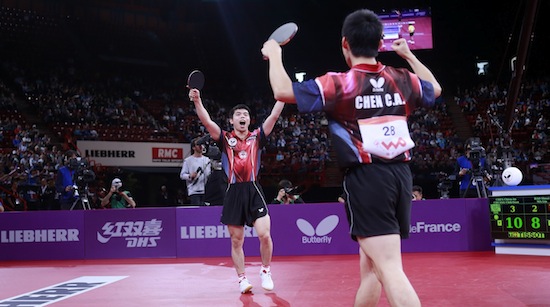 Paris – France, May 20, 2013: Chinese Taipei has broken 22 years of Chinese dominance to win the Men’s Doubles at the LIEBHERR 2013 World Table Tennis Championships, and Olympic Champion LI Xiaoxia (CHN) has won her first ever Women’s Singles World Championships in a thrilling day of table tennis in Paris, France.

Whilst holding the Iran Cup, which is awarded to the best Men’s Doubles pair in the world since 1947, CHUANG Chih-Yuan stated: “It’s the first time for Chinese Taipei, I can’t find the words. Standing on the podium, listening to the anthem was so special. This is a fantastic boost for table tennis in our country. “

“I was very nervous at the start of the match”, confessed Chen Chien-An. “Later I settled down and I was able to play my style.”

The loss for the Chinese pair was not only the end of an era for the Chinese dominance in the event, but it was also the last time that triple Olympic gold medalist MA Lin will put on the Chinese colors, as he announced his international retirement.

The 33 year old stated: “At my age I need to start reassessing my life. I am very proud of what I have achieved and I have no regrets. I am looking forward to the next chapter of my life.”

After collecting the 82-year-old Geist Prize Trophy, LI stated: “I want to thank all my team members for helping make my dream come true. Today I won because of my fighting spirits. This allows me to calm down and control myself in the tough situations. I learnt this from my victory at the London Olympic Games.”

LIU Shiwen was positive after her defeat in her first World Table Tennis Championships final, stating: “I played well, congratulations to LI Xiaoxia for winning, she just played that bit better today. This match has given me a lot of confidence. I believe I will start winning these major events if I can keep on making finals.”

There will be more gold for China tomorrow, as Olympic and defending World Champion ZHANG Jike faces Chinese compatriot WANG Hao in the same in the Men’s Singles final as 2011 at 15:30 local time (+2 GMT). Women’s Singles champion LI Xiaoxia partners GUO Yue, who won gold in 2011 against team mates DING Ning and LIU Shiwen in the quest for Women’s Doubles gold at 14:00 local time (+2 GMT).