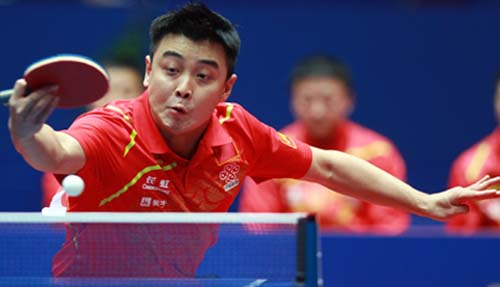 Lausanne, July 07, 2012: China top Seeds, The gold medallists four years ago in Beijing, China occupies the top seeded places in both the Men’s and Women’s Team events at the forthcoming London Olympic Games.

However, from the all-conquering outfits of 2008, only WANG Hao and GUO Yue retain their places; a new generation has replaced the established stars.

In 2008, WANG Hao lined up alongside MA Lin and WANG Liqin; in 2012 his colleagues will be MA Long and ZHANG Jike.

Similarly, for the Women; in the Peking University Gymnasium the now retired WANG Nan and ZHANG Yining joined forces with GUO Yue. In the ExCel Arena DING Ning and LI Xiaoxia complete the team.

It is a change from the Beijing schedule where the Team events commenced proceedings and the initial stage saw play on a group basis. In London, as in the singles, play will be on the knock-out principle from the outset.

Therefore, with China the top seeds and clear favourites to retain their titles, the team occupying the second seeded position in the draw will potentially avoid China in the semi-finals.

Korea represented by JOO Saehyuk, OH Sangeun and RYU Seungmin occupy the second seeded place in the Men’s Team event; in the Women’s Team event it is Japan with Kasumi ISHIKAWA, Ai FUKUHARA and Sayaka HIRANO forming the team.

Both will be in the opposite half of the draw to China but as for the third and fourth seeds, as to which half they will appear, depends on the draw which will be conducted in the ExCel Arena at 2.00pm on Wednesday 25th July.

In the Men’s Team event, the silver medalists in Beijing, Germany, with Timo BOLL. Dimitrij OVTCHAROV and Bastian STEGER in the London line-up occupy the fourth seeded place, behind the Japanese trio of Jun MIZUTANI, Koki NIWA and Seiya KISHIKAWA.

Korea led by KIM Kyungah with SEOK Hajung and Park Miyoung in support are the fourth seeds in the Women’s Team event.

The seeding is based on the Men’s and Women’s World Rankings, issued by the International Table Tennis Federation on Wednesday 4th July 2012. It takes into account only the three players named in the teams.