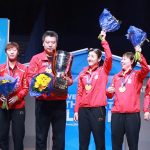 The Chinese team were pushed hard by a rapidly improving Japanese team, but in the end were too good to lift the historic Corbillon Cup at the Liebherr 2018 World Team Table Tennis Championships in Halmstad Arena, Sweden.

After claiming her third Team World Team Table Tennis Championships, DING Ning stated: “It is an honor to help China win this title for the 21st time. We work very hard and prepare diligently to ensure success.

The Japanese team are improving rapidly and are a very tough opponent, so we are all extremely happy to be the champions here.”

Semifinalists Hong Kong and the unified Korea team who took the world by storm over the last 2 days with their heartwarming story of promoting peace through table tennis, took home the bronze medals.

The Chinese Men’s trio of MA Long, XU Xin and FAN Zhendong ended host nation Sweden’s dream run in front of a capacity crowd in convincing fashion 3-0 to get the chance to equal the 21 titles of their women’s team tomorrow at 14:30 local time (+2 GMT).

China will face top seed Germany who survived a tough semi-final encounter 3-2 against Korea Republic fresh from their 3-1 victory against 2016 silver medallist Japan.

Table tennis legend Timo BOLL was the hero for the German team, securing 2 points against JEOUNG Youngsik and LEE Sangsu to push the match into a decider where Patrick FRANZISKA defeated JEOUNG Youngsik to make Germany through to the Final.

Timo BOLL who could not even walk yesterday with a back injury stated: “At 3pm today I was not even in the team, as my back was so bad.

After that I started to feel much better. I shocked myself at the level I could play today, it was an amazing match. We will be ready for China and we will be planning to win our first ever World Championships title tomorrow, we are ready.”

In the second division of the 2018 World Team Championships, Iran and Hungary Men’s Team defeated Ukraine and Slovakia respectively to advance to the Championships Division.

The Spanish and Turkish Women’s Team too knocked out France and Italy respectively to be part of the top 24 teams to be fighting to be World Champions in the 2020 edition of the World Team Table Tennis Championships in Busan (KOR). —- ITTF