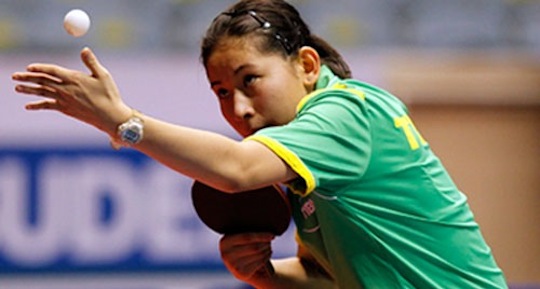 Lausanne-Switzerland, April 27, 2012: Brazil’s 16 year old Caroline KUMAHARA was the one player to cause a surprise on the second day of play, Thursday 26th April, at the GAC GROUP 2012 ITT World Tour Chile Open in Santiago.

A confidence boosting win in her opening encounter, the teenager from So Paulo, who has qualified for the forthcoming London 2012 Olympic Games, concluded her group stage matches in style. She beat Chile’s Ximena BUSTAMANTE in four straight games (11-6, 11-5, 11-2, 11-8) to book her place in the main draw. Defeat for WU Yue but for the other leading names on duty on the second day of action in the Women’s Singles event, it was first place in the group.

Japan’s Yuri YAMANASHI and Yuki NONAKA the two highest rated players in action finished in first place in their respective groups, as did ZHENG Jiaqi of the United States and Poland’s Kinga STEFANSKA. Also it was top place for Korea’s LEE Dasom in addition to the Brazilians Ligia SILVA and GUI Lin.

Similarly it was first place in the group without alarms and a place in the main draw for the three highest ranked players competing in the first stage of the Men’s Singles event. Brazil’s Hugo HOYAMA, Germany’s Philipp FLORITZ and Korea’s KIM Dong Hyun all secured places in the main draw, without surrendering a single individual game.

Similarly for Argentina’s Pablo TABACHNIK, the sixth highest rated on duty and Brazil’s Humberto MANHANI, the seventh rated; there were testing times.

Otherwise amongst the leading names it was success: Singapore’s WU Zhikang, the fifth highest world ranked player in action and Brazil’s Eric MANCINI, the seventh highest, all progressed without alarm. Photo by Mauricio Val