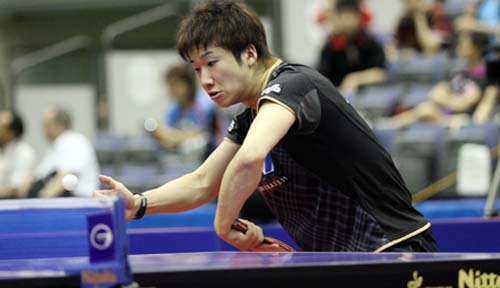 It is the highest global listing of his career.

Similarly on the Women’s World Rankings, success on the GAC GROUP 2012 ITTF World Tour is rewarded.

Korea’s KIM Kyungah who was the runner up in Japan but the winner one week later in Brazil, moves from no.11 to no.5.

Progress for Japan and Korea but once again China is the dominant force; they occupy the top four places on both the Men’s and Women’s lists, with the two reigning World champions continuing in top spot.

Meanwhile, for MA Lin, also from China, it is a drop of one place to no.6 as it is for Germany’s Timo BOLL, he falls to no.7.

Meanwhile, for the Women, Japan’s Kasumi ISHIKAWA is now at no.6, having previously been at no.5; with colleague Ai FUKUHARA moving in the opposite direction. She is now at no.7, formerly at no.8.

Singapore’s FENG Tianwei and China’s GUO Yue share the no.8 spot with Hong Kong’s TIE Yana at no.10. It is a climb of two places for FENG Tianwei but a fall of two spots for GUO Yue and one for TIE Yana.

The ranking lists will be used to determine the seeding in the singles events at the forthcoming Olympic Games.

Only two players from any one National Olympic Committee are permitted in the singles events and nominations having already been made; ZHANG Jike will be the Men’s Singles top seed followed by WANG Hao, Jun MIZUTANI and Timo BOLL.

In the Women’s Singles competition DING Ning will be the no.1 seed; next in line will be LI Xiaoxia, KIM Kyungah and Kasumi ISHIKAWA. —- ITTF, Photo: Tetsu Yamashita